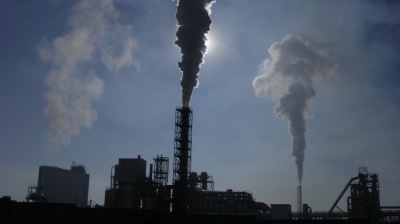 Coal power plants in the Western Balkans have made virtually no progress in cleaning up their emissions, with levels of sulphur dioxide (SO2) emitted by power plants in the region exceeding pollution limits by almost six times, according to a new report from Bankwatch.

All six Western Balkan countries are aspiring EU members – four already have candidate status – and under the Energy Community Treaty they are required to apply EU norms on pollution control. Albania generates almost all of its electricity from hydropower, but the report from NGO Bankwatch says air pollution in the remaining five countries remains “stubbornly high”.

While countries in the EU have been reassessing their use of coal in light of the climate crisis, in the Western Balkans not only does coal power make up a substantial share of electricity generation, but there are plans to build new or expand existing coal power plants in several countries.

There have been some moves away from coal recently, such as Montenegro’s decision not to expand the Pljevlja power station and the cancellation of ContourGlobal’s planned power plant in Kosovo, and some investments into wind and solar power, but by and large most countries in the region remain dependent on coal.

The “Comply or Close” report looks at emissions of SO2, dust and nitrous oxides (NOx) from coal power plants in the region included in the countries’ National Emissions Reduction Plans (NERPs) – Montenegro does not have a NERP as it has only one large combustion plant – finding an overall increase despite a modest lowering of dust emissions. 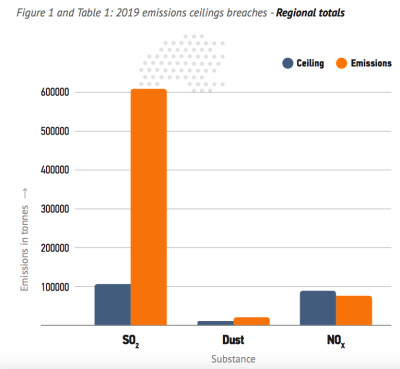 The report’s authors call on governments in the Western Balkan countries to reconsider their relationship with coal and either clean up or shut down heavily polluting power stations.

“Overall, governments can no longer place their bets on coal … decision-makers across the region need to start shutting down coal-fired power plants and shifting to sustainable forms of renewable energy. There is no way around it,” said Ioana Ciuta, energy co-ordinator with Bankwatch and co-author of the report.

The biggest problem is SO2 emissions, with the worst offenders in absolute terms being power plants in Serbia and Bosnia & Herzegovina. Between Bankwatch’s first report on the issue for 2018 and the latest covering 2019, SO2 emissions from coal plants covered by NERPs increased from 603,988 to 617,281 tonnes. North Macedonia’s Bitola B3 is the region’s worst offender in terms of breaching its individual ceiling.

Bosnia’s Ugljevik power plant is the biggest emitter of SO2 in the region, followed by the Kostolac B power plant in Serbia. Both plants have fitted SO2 reduction equipment, but Ugljevik’s is not yet functional and despite the investment Kostolac B still breaches the national ceiling by 1.5 times.

Dust emissions dropped slightly in 2019 but were still nearly 1.6 times the combined threshold. The Kosova B power plant in Kosovo remained the region’s top dust polluter, emitting 5.4 times as much dust as its emissions ceiling.

Power producers did better with NOx emissions, which were below the 2019 ceilings set in the NERPs for the region as a whole. At the country level, Serbia and North Macedonia remained within their NOx ceilings, while Bosnia and Kosovo breached theirs.

Emissions from coal-fired power plants in the Western Balkans have been shown to be harmful not only to the region’s population but also to nearby EU countries. A 2019 report from HEAL, CAN Europe, Sandbag, CEE Bankwatch Network and Europe Beyond Coal estimated that coal power plants across the region are responsible for around 3,900 premature deaths annually, spread between the region and nearby EU countries.

“Our alarming findings are a testament to governments’ foot-dragging, that is already taking a toll on human life. Thousands of people across the region and in neighbouring EU countries are dying prematurely from the pollution from these coal power plants. This is unacceptable,” said Bankwatch’s Balkan air pollution campaign co-ordinator, Davor Pehchevski.

“The enormous breaches and lack of improvement on SO2 and dust show a worrying neglect of pollution control measures by decision-makers,” said the report.

“Moreover, the fact that the two largest desulphurisation investments have not yet resulted in significant emissions cuts shows the need to consider closing more coal plants, sooner than planned.

“Any government that insists on keeping these dirty power plants going must step up investments in pollution control equipment that can comply with the LCP BREF, the EU’s newest industrial pollution standards. Until then, the plants’ operating hours need to be trimmed to meet the pollution limits in the Large Combustion Plants Directive that the countries have committed to as part of the Energy Community Treaty,” said Pippa Gallop, Southeast Europe energy advisor with Bankwatch and a co-author of the report.

Looking at ways to improve the situation, the report recommends that the European Commission and EU member states support the strengthening of the Energy Community Treaty’s dispute settlement mechanism.

“The EU and Energy Community also need to develop mechanisms, such as a tax on CO2, or a carbon border tax, to ensure that heavy polluters cannot so easily use their lack of investments in pollution control as a market advantage in exporting electricity to the EU,” the report adds.

At present, the Community Treaty secretariat can open cases against countries and exclude them from decision-making for some time if the Ministerial Council agrees that they are non-compliant, explained Gallop to bne IntelliNews. “In serious and persistent cases the international financial institutions can be asked to stop financing energy projects in the countries for a certain period. But no fines can be issued under the Energy Community Treaty, unlike in the EU, and this dramatically weakens its effectiveness. So when we say we want to see enforcement strengthened, we want to see actual penalties that would be proportional and dissuasive.”

COMMENT: “Patronagists” scandal brings back memories of the communist era in Albania