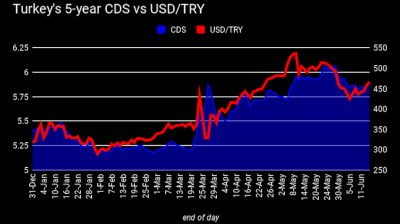 In a surprise move, Moody's Investors Service has downgraded Turkey's long-term issuer ratings to B1 from Ba3. The rating agency announced its decision on June 14 after the market close.

Moody’s also said it has maintained Turkey's negative outlook. “The balance of risk is firmly tilted to the downside,” it said.

The timing of Moody’s’ announcement was unexpected since it was not scheduled to issue a rating review. The Monday market opening on June 17 will now be closely watched.

Moody's said the downgrade reflected its view that the risk of another Turkish balance of payments crisis, following on from the turmoil seen last summer, continued to rise, and with it the risk of a government default.

“The B1 rating balances these risks against the country's fundamental credit strengths, particularly its large, diversified economy and still-moderate levels of government indebtedness,” the rating agency said.

Ceilings generally act as the maximum ratings that can be assigned to a domestic issuer in Turkey, including for structured finance securities backed by Turkish receivables.

The decision to align the foreign currency bond ceiling and the government bond ratings reflected Moody's view that exposure to a single, common threat—loss of external confidence and capital—meant that the fortunes of public and private sector entities in Turkey were, from a credit perspective, increasingly intertwined.

“The impact of the continued erosion in institutional strength and policy effectiveness on investor confidence is increasingly outweighing Turkey's traditional credit strengths including its large, diverse economy and the low level of government debt,” Moody’s reiterated.

Turkey is structurally highly reliant on external capital flows, and Moody's confidence in its ability to continue to attract the large sums needed each year to repay debt and sustain growth is waning.

Turkey remains highly vulnerable to a further prolonged period of acute economic and financial volatility, according to the rating agency.

Foreign exchange reserve buffers are weak and Moody's expected them to weaken further over the next two years relative to economy-wide short-term liabilities.

“While policy announcements have been made, the political authorities have yet to implement a plan that would allow the economy to adjust to a new, more sustainable equilibrium due to the negative short-term economic impact that this adjustment would entail,” the rating agency also said.

The government's willingness or ability to implement policies that will sustain external investor confidence in the economy and financial system by addressing underlying weaknesses remained uncertain, according to Moody’s.

“Since mid-2018, the government has announced a number of economic reform packages. Ultimately, these announcements have been either reactive to particular pressures on the economy or a restatement of measures that would be credit positive if implemented, but have been discussed for years, and where little concrete has been done to execute on these policy aspirations. Most government measures, including those targeting the banking system, continue to be focused on the near-term priority of propping up economic activity at the expense of eroding the underlying resilience of the economy and its banking system to external shocks, in part by increasing its fragility to shifts in market sentiment,” it said.

The longer that remains the case, the more the weakness implied by Turkey's very high reliance on external capital across all sectors of the economy comes to dominate Moody's analysis; and the greater the risk of further externally-sourced shocks involving further capital outflows, loss of reserves, a weakening in the exchange rate, rises in inflation and severe damage to medium-term growth.

As a result, Moody's said it believed that the country's vulnerability to an acute and highly disruptive balance of payment crisis that ultimately would significantly constrain the capacity and perhaps the willingness of the government to service its debt was now more aligned to a single B rating, despite its still moderate debt burden relative to similarly-rated peers.

“In consequence, both gross and net reserves have fallen since February, with the decline in net reserves being particularly pronounced. Gross and net reserve levels have been structurally weak for many years, but this decline contributes to a significant increase in external vulnerability for the country.”

“Moreover, funding costs have risen rapidly, with yields up by around 400 basis points since February,” Moody's said.

“The fall in FX reserves seems contrary to the central bank's longstanding policy to allow the exchange rate to float freely, and raises further concerns about the transparency and independence of the central bank and, by extension, Turkey's broader institutional framework,” it added.

Other observations made by Moody’s included the following.

Ongoing disagreement between Turkey and the US

“External pressures are exacerbated by the ongoing disagreement between Turkey and the United States, this time relating to Turkey's purchase of the S-400 missile system from Russia. The sanctions which the US Congress will consider if the purchase goes ahead, while largely undefined to date, cast a further shadow over Turkey's economy and financial system.”

“However, weakening external buffers point to this being an unstable equilibrium, and the more time passes the more the government's ability to steer the economy away from a more credit-negative path of a balance of payments crisis is diminished.”

“Number of possible near-term drivers for further instability”
In Moody's view, the re-run of the Istanbul mayoral election on June 23 creates potential for political unrest that could trigger a further material decline in the value of the lira and a further depletion of FX reserves.

“The imposition of sanctions on Turkey could also lead to a further, highly credit negative, market reaction.”

Even if Moody's does not currently expect such a programme to be needed, the potential tension between sanctions and external support could in itself further undermine investor confidence in credit.

Likely downgrade
Moody's would likely downgrade Turkey's rating if it were to become clear that avoiding a more credit-negative path was becoming increasingly unlikely, perhaps because of the currency crisis deepening further. Any indication that capital controls were becoming more likely or that Turkey's fiscal strength was deteriorating in a significant way would be credit negative.

“A material deterioration in relations with the US in the form of sanctions would also put downward pressure on the rating due to the implications that might have for receiving IMF assistance.”

“Upward rating movement unlikely”
“However, the rating could be stabilised if the authorities were able to present and, crucially, implement a credible and broad-based programme for addressing external pressures and engineering a rebalancing of the economy. Significant external financial support, and the policy agenda that would likely accompany it, would also be supportive for the rating.”

LONG READ: The Growers - a handful of countries in New Europe are coping with the coronacrisis and are still expanding
5 days ago
Foreign share of Ukraine's domestic bonds falling, demand for fresh debt spluttering
3 days ago
Russia’s VTB trapped in a London lockdown until 2024
4 days ago
Movie night at the airport
8 days ago
Raw feelings in Turkmenistan as Berdimuhamedov pays 3.51 to the dollar
9 days ago