Weekend spike in COVID-19 cases in Czechia and Hungary 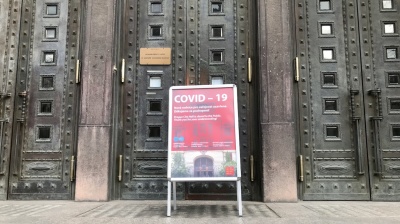 A notice announcing the closure of New City Hall in Prague due to the coronavirus in March.
By bne IntelliNews September 14, 2020

New cases of coronavirus (COVID-19) in Czechia topped 1,500 on September 12, a record daily number of cases since March. The authorities also reported a record number of infected patients, more than 14,000 as of September 13.

On the same day, Hungary reported the largest single-day increase in new COVID-19 cases since the start of the pandemic, 916. This is four times higher than the highest figure during the first week and a two-fold increase from last week's record data. The number of fatalities stands at 637, and there are 7,603 active infections.

The Saturday figures are also concerning considering they were recorded over the weekend, when considerably fewer tests are carried out. It was the fifth subsequent day to post an increase of more than 1,000 cases. A total of 288 people are hospitalised, of which 69 are in a serious condition.

This has already resulted in third countries adding the two Central European states to their coronavirus risk lists.

Last week, several European countries added Czechia on their lists of high-risk countries. Germany has joined Belgium in placing the Czech capital on its red list. Citizens traveling back from Prague need to submit a negative COVID-19 test result or undergo quarantine.

On September 11, Danish government also decided to put Czech tourists on its list of “high-risk” countries. The Danish authorities allow travels for work, job interviews, transport or delivery of goods.

Slovakia announced its Central Crisis Management Team will deal with the possible inclusion of its closest neighbour Czechia among the so-called 'red' countries on September 13.

"We'll have to decide how to get out of it. The ties between Slovakia and the Czech Republic are huge, namely human, family, student and business," said the Prime Minister Igor Matovic, as quoted by the Slovak News Agency, stressing that Bratislava will have to address the question of how to protect Slovakia from the possible introduction of the disease but at the same time not endanger economic and social relations with the Czech Republic.

"It can be compromised," he said, adding that a particular region will be described as risky and the public will be strongly encouraged not to travel unless necessary.

Due to the surge in new cases, England, Wales, and Scotland added Hungary to their quarantine lists, forcing travellers from the country to self-isolate for 14 days.

Before that Hungary introduced a 30-day ban on entrance by foreigners, except for citizens from V4 countries from September 1, without consulting the European Commission, which asked Hungary to apply border measures in a non-discriminatory way.

No economic shutdown in Hungary

In Budapest, Prime Minister Viktor Orban told the state news channel on September 12 that his government is working to ensure that Hungary is able to function and fight the pandemic without shutting down the economy.

Orban referred to the latest "National Consultation" survey behind the government’s decisions saying respondents overwhelmingly believed that the government should prevent the epidemic from paralysing the country.

The government wants to avoid curfews or re-introducing digital education, he said.

"Everything should go on in its own order, whether it is jobs, schools, and even sports, culture and art."

"The goal is not to have the state flex its muscles, but if the rules are not observed they will be enforced," he said.

If a customer is found without a mask in a shop, both the customer and the shop will be fined. In the third such instance, the shop could be closed.

In a Friday radio interview, Orban announced that coronavirus test prices at private clinics would be fixed. Public testing has been free only if patients show symptoms or if they had been in contact with someone carrying the virus. This has led to a surge in demand at private clinics, which charge €100 on average for PCR tests.

Orban said he was not as worried as during the first wave of the epidemic, because "we now know exactly what we are facing" and the country has all the equipment needed, including 10,000 empty hospital beds and ventilators.

Hungary waged a successful fight against the pandemic in the first wave and success this time will be measured in the number of deceased. Orban asked young people to act responsibly and observe the rules.

The prime minister said that the government is in daily contact with the other three Visegrad Group countries. The V4 set up an epidemiological consultation office during Poland’s presidency to strengthen cooperation, he added.

Steps have been taken in Czecha, including the Ministry of Health Care’s reintroduction of the obligation to wear face masks indoors across the whole country.

“Face masks are a precautionary measure. We cannot wait for the epidemiological situation to worsen at the ‘Traffic Light’ [system introduced earlier by the government], we would then have to use so-called repressive anti-epidemic measures in addition to the masks, which, however, can hurt economically," said epidemiologist Rastislav Madar, as quoted by the Czech News Agency.

Since September 9, the Czech health care authorities have added six more regions with an increased risk of COVID-19 transmission to the so-called traffic light system. There is an initial community transmission in the Czech capital Prague and Central Bohemia.

Culture Minister Lubomir Zaoralek stressed that the government's failure to push for the obligation to wear face masks back in August was a huge mistake. "There is no point in denying it. The government could have been tougher, more resolute. It is a mistake that we missed it," the minister added.

Meanwhile, a debate has erupted over whether to resume the activities of the Central Crisis Team (CCT).

The government’s junior coalition partner, the Social Democrats, plan to propose this at the government meeting on September 14. However, this is opposed by Prime Minister Andrej Babis, who said earlier last week that there is no reason to relaunch this body which was active during the state of emergency back in spring. As Babis stressed, there is the government's health risks council which runs the activities previously carried out by the CCT.

The renewal of the CCT is supported by the opposition. "You can't be dictated to and let this country be ruled by one crazy man [Babis] who decides according to what Mara Prchal [Babis’ PR strategist] tells him, or his fortune teller or astrologer," said the chairman of the opposition party TOP 09 Miroslav Kalousek, as quoted by the news agency.

"The CCT must start meeting and applying the already prepared scenarios, which were supposed to be prepared for various models of epidemic development. However, I am afraid that those scenarios are not ready, because the government has done nothing," said Kalousek.

According to Prymula, the CCT is not needed, as there are not so many logistical problems now which need to be solved. The core is epidemiological, hygienic and clinical issues which, as he pointed out, should be managed by the Ministry of Health.

Prymula confirmed hygienic stations are at their maximum capacity, however, they are already recruiting about 200 people in order to manage the situation better.

The billionaires club, where the mega-wealthy go to meet each other
CEZ approves sale of Romanian assets to Macquarie
Czechia moves towards full lockdown as government restricts movement of citizens