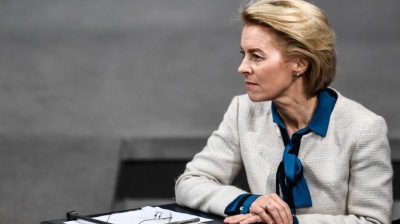 The European Commission President Ursula von der Leyen told Poland and Hungary on November 25 to go to court over the proposal to link the disbursement of EU funds under the bloc’s next budget to adhering to the rule of law.

Warsaw and Budapest are blocking the adoption of the EU’s €1.8 trillion budget for 2021-2027, including the €750bn recovery plan to reinvigorate the bloc’s economy after the coronavirus (COVID-19) pandemic.

A group of Western European member states have proposed that access to the money should be made conditional on observing the rule of law, a swipe against Poland and Hungary, where populists seized political control over much of the public life.

Poland and Hungary are under investigation by the EU for a series of reforms, which have put courts and media under political control of the ruling Law and Justice (PiS) and Fidesz parties, respectively.

Both countries insist it is up to them to carry out reforms they see fit. Poland’s PiS has long said that the country’s courts need an overhaul for being ineffective and infested with communist-era judges.

“They can go to the European Court of Justice and allow the new rules to be tested there,” von der Leyen said in the European Parliament.

“That is the place where differences of opinion about legislative texts are usually settled and it is not done at the expense of millions and millions of European citizens who are urgently waiting for our help,” she added.

Poland, with a population of 38mn, has long been the biggest recipient of EU funding and in the bloc’s next budget, it stands to receive a total of €170bn in 2021-2027. That is around a third of the expected value of the country’s GDP in that period.

A country of 10mn people, Hungary’s total funding during the next EU budget cycle could come to around €61bn, which is 43% of the country's annual GDP over the next seven years.