VISEGRAD BLOG: Nato rethinks the security of its Eastern Flank 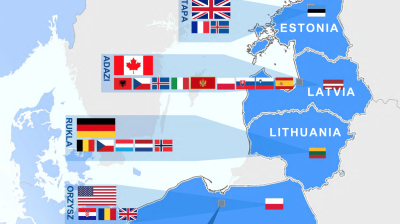 The battlegroups stationed in Poland and the three Baltic states since 2017 are being doubled in size to more than 6,000 troops.
By Robert Anderson in Prague March 3, 2022

Russia’s blatant and bloody aggression against Ukraine, together with its creeping takeover of Belarus, is forcing Nato’s members in Central and Eastern Europe to rethink the security of the pact’s “Eastern Flank”.

The Kremlin’s resort to massive force to achieve its objectives in Ukraine has prodded Nato member states to extend significant military aid to Ukraine to stiffen its resistance to the Russian military incursion.

Nato – particularly the US – has been helping to train, fund and reform Ukraine’s army since Russia’s invasion of Crimea in 2014 but some states – notably Germany – have been squeamish about sending Kyiv offensive weapons, or even allowing other states to send German-made kit.

These scruples have now disappeared and Nato as well as EU countries are rushing to send materiel to bolster Ukraine’s defences, including neutral states such as Sweden and Finland.

The German government had previously followed a policy of not sending offensive weapons to combat zones. Chancellor Olaf Scholz has now announced that Berlin will send 1,000 anti-tank weapons and 500 Stinger anti-aircraft defence systems to Ukraine, and would authorise the Netherlands to send Ukraine 400 rocket-propelled grenade launchers, and Estonia to send nine howitzers. Germany is also planning to deliver a further 2,700 anti-aircraft missiles, German media reported on March 3.

“With the invasion of Ukraine, we are in a new era,” Scholz told the Bundestag on February 27. “We must support Ukraine in this desperate situation.”

For the first time, the EU will provide lethal equipment to a third country. “Another taboo has fallen,” said the EU’s chief diplomat Josep Borrell.

Hungary – Russian President Vladimir Putin’s closest ally in the EU – has been conspicuous by its refusal to send military aid to Kyiv, though Prime Minister Viktor Orban has not prevented the EU from giving help. Hungary has also refused to station Nato forces on its territory.

The Ukraine crisis is also finally pushing laggards such as Germany to boost their own defence spending towards the Nato target of 2% of GDP.

Poland has also given the go-ahead to new legislation aiming to boost the country’s defence capabilities by enlarging the army from the current 100,000 people to 300,000, as well as earmarking more money for the modernisation of equipment. In line with the proposed law, Poland plans to increase its defence spending to 2.5% of GDP by 2024, bringing forward an earlier deadline of 2030.

President Alexander Lukashenko recently held a referendum to rubber stamp his decision to host Russian nuclear forces. Russia could in the future station troops and missiles there permanently, and use Belarus as a base for further incursions westwards.

This endangers Nato members Lithuania and Poland, which border Belarus, and could leave the three Baltic Nato member states very vulnerable to being isolated from the rest of Nato.

A Russian thrust from Belarus towards its Kalingrad enclave on the Baltic Sea could quickly close off the 65km Suwalki gap between Poland and the three former Soviet republics of Latvia, Estonia and Lithuania. This would make it very difficult for Nato to reinforce them and fulfil its Article 5 guarantee to defend its members.

If Ukraine were also to become a satellite of Moscow, this would then also make Nato members Slovakia, Hungary and Romania frontline states, as well as leaving Moldova, a former Soviet republic that is not in Nato, very exposed.

Nato’s Western European members have recently moved more troops into the Baltic States, Poland and Romania to strengthen the pact’s deterrence against Russia and provide reassurance to the Eastern Flank states.

The Enhanced Forward Presence battlegroups stationed in Poland and the three Baltic states since 2017, following Russia’s invasion of Crimea, are being doubled in size to more than 6,000 troops.

More fighter jets are also being sent to the region, particularly the Baltic states, which lack supersonic fighters of their own. The US is sending up to eight F-35 jets, the UK four Eurofighter Typhoons. Denmark is sending four F-16 fighter jets to Lithuania. France is sending Rafale fighter jets to Poland and Germany is sending an unspecified number of jets.

The UK also said on Wednesday it was sending to Poland its Sky Sabre defence system, which is intended to create a “no cross air line” stretching for 240km along Poland’s eastern border with Ukraine.

Nato has also agreed to activate for the first time its Response Force, a 40,000-strong multinational group, of which up to 5,000 troops are ready to deploy immediately.

Romania is being strengthened through the creation of a new battlegroup led by France. In the meantime, France will act as the lead element of the new Response Force deployment to Romania. Some 40 supersonic jets from the US, Italy and Germany are currently in position in Romania.

Nato is also considering setting up new battlegroups in the other potential new frontline states, Slovakia and Hungary, though the latter has already ruled this out.

So far  – apart from Hungary – there has been surprisingly little opposition to the stationing of  more Nato troops on the Eastern Flank. Only in Slovakia has it become a significant political issue, but the government has ploughed on regardless.

Slovakia's defence will be reinforced by about 1,200 foreign Nato soldiers within Nato forward presence units, Defence Minister Jaroslav Nad said on February 26. According to the minister, Germany will provide the Patriot surface-to-air missile system to Slovakia. "Slovakia does feel threatened," Naď said.The minister also said that together with Czechia, Poland and Slovenia it has started talks with the US on whether Washington can provide them with passive sensors to defend the border.

In the future Nato may be more amenable to calls from the Poles and the Balts to station even larger and more permanent forces there, perhaps including heavier offensive weapons. No one is so far seriously suggesting moving nuclear weapons to the Eastern Flank at the moment.

This is all making other European countries – notably Finland and Sweden – think again about joining Nato to protect themselves, given the way Ukraine was picked off because it was not a member of the Western defence alliance.

Countries even further behind the new frontline are also now clamouring to join Nato, with Kosovo becoming the latest unlikely potential candidate country.

Russia’s main demands on Ukraine were that it renounce the goal of joining Nato in its constitution and that it should pledge to remain neutral and not allow any offensive missiles to be based on its territory. It also demanded the withdrawal of Nato forces from the Eastern Flank states.

These demands have made Europe’s neutrals reconsider joining Nato – a drive which has only been reinforced by Russia’s angry threats over this possibility.

If proof were needed, this all demonstrates that Nato expansion has not been something that the West has been pressing on Eastern Europe as part of some aggressive plot. Quite the reverse, countries are clamouring to join Nato because of their fear of Russian revanchism, a fear that Russia has now shown has real grounds.

Nevertheless, deploying more forces to the region – and especially nuclear weapons – or allowing more bordering states to join Nato, would be viewed as major provocations by Russia, and could lead to a New Cold War or worse. We may be witnessing the construction of a new Iron Curtain in Eastern Europe, though this time the former Warsaw Pact states of Central Europe would be on the western side.