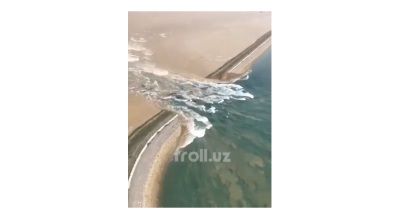 Heavy rain and strong winds led to the collapse of a part of the Sardoba Reservoir dam in Syr Darya region, south of Tashkent region, on May 1, 2020. In addition to the damage to households, social infrastructure, roads, energy, communication, and water systems, the flooding damaged the agriculture infrastructure in the area and affected cotton, grain, and melon crops.

Uzbek President Shavkat Mirziyoyev, having assessed the scale of destruction, promised not only to restore the affected communities, but also to make them better and turn them into model settlements. To inspect the reconstruction work, Mirziyoyev paid a visit to the region on October 13.

Some 86 five-storey houses have been commissioned in the region since the disaster.

“The damage from the flood was huge. We needed to both eliminate the consequences of the tragedy and normalize people's lives in a short time. Not every state can handle this task. We have spoken to all the victims. The forces of ministries and regions were involved, and operational work was established. We managed to provide families with housing before the cold days. The most important thing is that people are not worried, they are happy," Shavkat Mirziyoyev said.

Previously, many houses in the affected area had no natural gas supply. Today, these places have all necessary engineering communications.

“Specialists came from all over the country. Everyone was convinced that if we unite and take care of each other, we can do a lot, and this is our strength, " Mirziyoyev added.

At the end of his trip, Mirziyoyev met with citizens affected by the flood.

"We have been forced to witness different hardships over the past five months. We worked hard, shoulder to shoulder and have restored conditions, built new houses and roads. I am very pleased to see the results of this work today. But the mood of people is exactly what pleases and adds strength most of all, " Mirziyoyev concluded.

The break of Sardoba reservoir dam caused serious damage to residential buildings, social facilities and agricultural land. A government commission was set up, and all forces and means were used to eliminate the consequences of the disaster. Residents of flooded communities were evacuated to safer zones, provided with shelter and food. The Ministry of emergency situations, the Ministry of water management, the Ministry of defense, law enforcement agencies, construction and repair organizations and local authorities acted in concert, so that in a short time life here returned to normal.

The disaster that happened in May 2020 caused nearly a billion dollars` worth of damage.

Attack of the Debt Tsunami: global debt soars to a new all-time high