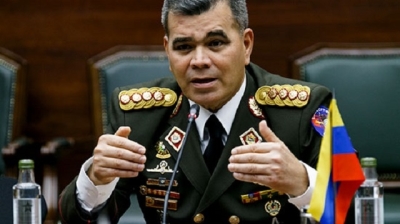 The tankers will be escorted by Bolivarian National Armed Forces boats and planes said Venezuela's defence minister Vladimir Padrino.
By bne IntelIiNews May 21, 2020

Venezuela’s defence minister has instructed the country’s navy to escort Iranian tankers bringing fuel to the gasoline-starved nation as soon as they enter its exclusive economic zone. His move ups the stakes in the stand-off with the Trump administration over the deliveries, due to arrive between late May and early June. White House officials would plainly loathe to see one US-sanctioned nation coming to the assistance of another, especially in a presidential election year.

"When they enter our exclusive economic zone, they will be escorted by Bolivarian National Armed Forces boats and planes to welcome them in and thank the Iranian people for their solidarity and cooperation," Vladimir Padrino Lopez, Venezuela's defence minister, said on state television on May 20, adding that the government was in touch with Iran’s defence minister.

Tehran has issued several warnings to the US, saying there will be a firm response should it choose to engage in “piracy”.

“No country is obligated to obey the arbitrary and unilateral American sanctions against other countries. We are committed to doing our normal trade exchanges with Venezuela. The oil tankers carrying gasoline have been freighted after receiving an order from the Venezuelan government. This is based upon the free will of countries in customary international exchanges,” Iranian government spokesman Ali Rabiee said on May 19.

“We want to make sure that these commercial consignments will be fully secure from the US government’s maritime banditry, which has taken place in the past,” he added.

“News received from informed sources indicate that the US Navy has sent four warships and a Boeing P-8 Poseidon from the VP-26 squadron to the Caribbean region,” Iranian news agency Nour, which is close to Iran’s Islamic Revolutionary Guard Corps (IRGC), reported at the weekend.

Venezuela, heavily hit by US sanctions with Washington labelling the regime under President Nicolas Maduro a criminal administration, is in the midst of an economic crisis. It has the world’s largest oil reserves but its refining industry, unable to obtain required parts and maintenance because of underinvestment and sanctions, has fallen to pieces, leaving Venezuelans exposed to severed fuel shortages. Heavy sanctions aimed at Iran by the Trump administration include measures aimed at entirely forcing Iranian crude oil off world markets. The US policy is to strangle Iran’s economy to force Tehran to come to the table to renegotiate the Islamic Republic’s clout and role in the Middle East.

Guaido was cited by Reuters as saying the fact that Maduro’s socialist government was importing fuel showed its mismanagement of the country’s oil industry. Venezuela’s refining network had 1.3mn barrels per day (bpd) of capacity before it collapsed.

“We are very concerned for the safety of Venezuelans, and of Latin America as well, due to this attempted Iranian presence on Venezuelan soil,” said Guaido, who leads the opposition-held National Assembly and is recognised as the rightful president by dozens of countries, including the US.

Maduro calls Guaido a US puppet seeking to oust him in a coup. He blames the American sanctions for Venezuela’s economic strife.

Guaido also said his team believed Venezuelan officials were paying Iran for the fuel with “blood gold” from informal mines in Venezuela’s southern jungles, which have caused massacres amid gang battles for territory.

Romania’s Blue Air goes from flying high to seeking debt restructuring
4 hours ago
HDZ’s Andrej Plenkovic ready to form new government in Croatia
12 hours ago
Czech mining group OKD to shut down its mines for six weeks
14 hours ago
Hungarian government paid Wizz Air €14mn to fly in PPE from China
1 day ago
Week before crucial vote, no way of telling who will be Poland’s next president
1 day ago