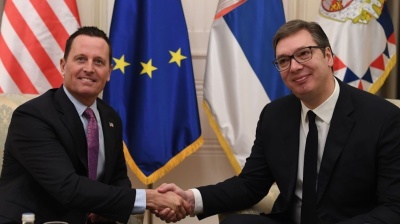 US President Donald Trump’s special envoy for Serbia and Kosovo, Richard Grenell, said that an agreement to resume railway services between the two countries is of great importance for both of them, media reported on January 25.

After agreeing on restoring air links between Kosovo and Serbia, the US envoy indicated in Belgrade that he has managed to persuade the parties to make arrangements for the railways as well. The creation of the train lines has become a priority after US officials brokered another deal earlier in the week to restore air traffic between the two countries after 21 years.

Grenell visited Kosovo and Serbia last week. In Belgrade, Granell said that the agreement on railways was reached in principle.

During his news conference in Belgrade, Grenell said that details of an agreement to reactivate the railway service will be discussed during a meeting in Berlin on January 27, Kosovan broadcaster RTK reported.

Kosovo declared independence from Serbia in 2008 but it is still not recognised as a separate country. Relations between Kosovo and Serbia worsened after Pristina introduced 100% tariffs on Serbian products in November 2018 due to political reasons.

The Serbian President Aleksandar Vucic said his country has lost €435mn because of the taxes, while Serbian companies have been pushed out of Kosovo’s market.

"Come sit down and make arrangements for the railways," Grenell said.

“I am very grateful to Richard Grenell for understanding the needs of Serbia with a rational approach and a strong desire to move forward. We had a good, open and honest conversation,” Vucic said in a tweet.

However Vucic, demanding the abolition of the tax, underlined that a railway deal makes no sense unless there are goods on the train.

He also said that Serbia is ready to work on the construction of a highway towards Kosovo.

North Macedonia, Albania and Serbia to invite Kosovo to join mini-Schengen on October 30
COMMENT: Why the Balkan region should be on investors’ radar screens
US signs MoUs on 5G cyber security protection with three SEE states

Pro-EU opposition has its best-ever shot at winning the presidency in Moldova
1 day ago
Zelenskiy scrambles to defuse anti-corruption crisis of confidence in his government
20 hours ago
Lukashenko closes borders, sends top aides to western regions to face down faux NATO threat
1 day ago
Sofia streets empty as most of Bulgaria put in coronavirus “red zone”
1 day ago
Russian residential real estate developer Samolet Group IPOs at a price of RUB950 per share
2 days ago