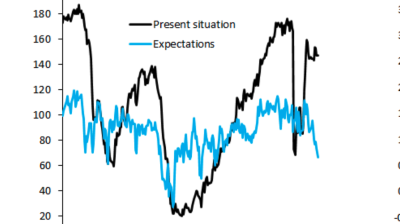 Economists have been cutting the global growth outlooks all year as the chances of a global recession become increasingly likely. / wiki
By bne IntelliNews July 2, 2022

The worsening economic data coming out of the US and yet another coronavirus (COVID-19) lockdown in China will tip the world into a global recession, the Institute of International Finance (IIF) said in a note on July 1.

The think-tank has been warning of a possible recession in Europe as a result of soaring inflation, exacerbated by the war in Ukraine. But the problems are spreading further afield as stagflation is about to set in as central banks around the world fail to take control of inflation.

Six weeks ago the IIF was predicting its global growth forecast at close to zero, adjusting for sizeable statistical carry-over from last year.

“Since we made this forecast, however, it has been US data that have surprised to the downside the most. This is driven by the sharp tightening in US financial conditions, with mortgage rates seeing their biggest rise – in real terms – in over fifteen years,” said Robin Brooks, managing director and chief economist at IIF, with his colleagues Jonathan Fortun and Jack Pingle, in a note.

“The rapid slowdown in the US pushes our global growth forecast from near zero into outright contraction. There is obviously huge uncertainty around any forecast currently, but we struggle to identify material upside risks,” Brookes et al added.

A quick end to the war in Ukraine would make a big difference, as that would quickly bring an end to the food crisis, as well as reducing energy and commodity prices, which in turn would reduce inflationary pressure. However, with Russia's very slow, albeit steady, progress in the war, a quick end seems increasingly unlikely. Ukrainian President Volodymyr Zelenskiy told the G7 summit in Bavaria last week that he would like to see the war over “by Christmas” but called once again on the West to provide more arms and ammunition, without which Ukraine has little chance of repelling the Russian forces.

At the same time, Brookes says that the coronavirus pandemic is unlikely to abate anytime soon and that more mutations and fresh infection waves are to be expected, which will lead to new lockdowns.

Previously the IIF was anticipating an outright recession in the Euro zone and on weak growth in China, with a 3.5% global growth forecast for 2022 substantially below consensus. Since then, the World Bank has almost halved its global growth forecast to 2.8% from 4.1% at the start of the year and others have also been revising downwards as the situation continues to deteriorate.

“The biggest downside surprise in growth has been in the US, however, with forward-looking measures of consumer confidence tumbling as housing enters deep recession, driven there by the sharpest rise in real mortgage rates since at least 2010,” says Brookes.

“This deterioration in US data tips our global growth forecast – which was flat adjusted for statistical carry-over – into outright contraction for this year. This is before factoring in further deterioration in European data that is led by Germany,” Brookes adds.

Germany’s economy is also slowing, and Berlin is becoming increasingly nervous about the possibility of being shut off from Russian gas. German Vice-Chancellor Robert Habeck has already put the country on energy crisis “alert”, whereas the rest of the EU is still on the lower “early warning” and has put plans in place to restart coal-fired power plants, laws to pass soaring costs on to consumers and preparing an energy rationing system.

At the same time, the forward-looking orders minus inventories measure using Germany’s manufacturing PMI has sunk to levels last seen during the global financial crisis in 2008, reports the IIF. German consumer confidence has been languishing at levels below the 2020 COVID shock, “which is remarkably bad,” says Brookes.

Russia is in position to inflict real damage in Europe, should it turn off the gas, as that would send gas prices spiking and the cost of commodities upwards too that would only pour petrol on the inflation bonfire that is already burning. The next step in this drama is that Nord Stream 1 pipeline will be closed on July 11 for its annual 10-day maintenance and Habeck says he is afraid that it will not be turned on again. European gas tanks are already half full, but the bloc still needs to import significant amounts of Russian gas if it is to reach the 80% full by October 1 target set by Brussels at the start of this year.

China also remains a wild card, says Brookes, as the spread of the coronavirus there is not predictable.

“Unlike the first COVID wave in the first quarter of 2020, weakness in Chinese data looks set to be more drawn out, whether in manufacturing or in services. Whatever happens, China is unlikely to be a source of stimulus as global recession risk builds,” says Brookes.

Moody’s downgrades Turkey to six notches below investment grade
Home of the humbled lira, Turkey’s the biggest cryptocurrency market in the Middle East
Envoy says start made on construction of Turkish attack drone factory in Ukraine

The war in Ukraine is starting to look like it might last a long time and that means putting the economy onto a war footing. Over the first six months of fighting running the economy has been little more than crisis management. Now it needs a plan.

Missiles or sabotage: What caused the explosion at the Russian airbase in Crimea?

Satellite images show that a mysterious explosion on August 9 destroyed at least nine planes and multiple storage facilities at a Russian air base in Crimea.

Population decline across almost all of Emerging Europe will result in the populations of many countries dropping to levels not seen since the early 20th century.

This could prevent it from tackling some of the country’s biggest problems, such as its dependency on Russian energy, soaring energy bills, worsening environmental problems, and its stuttering economic model.

Poland ups the ante in feud with Brussels over judiciary reforms

If Kaczynski and other PiS figures are to be believed, Poland no longer wants to meet the EU's milestones and will engage in direct opposition to the Commission.

CEPR's action plan for Ukraine's wartime economy
10 hours ago
Missiles or sabotage: What caused the explosion at the Russian airbase in Crimea?
3 days ago
Population decline to take Emerging Europe back to the early 20th century
3 days ago
Czech government remains colour blind on green issues
3 days ago
Poland ups the ante in feud with Brussels over judiciary reforms
4 days ago