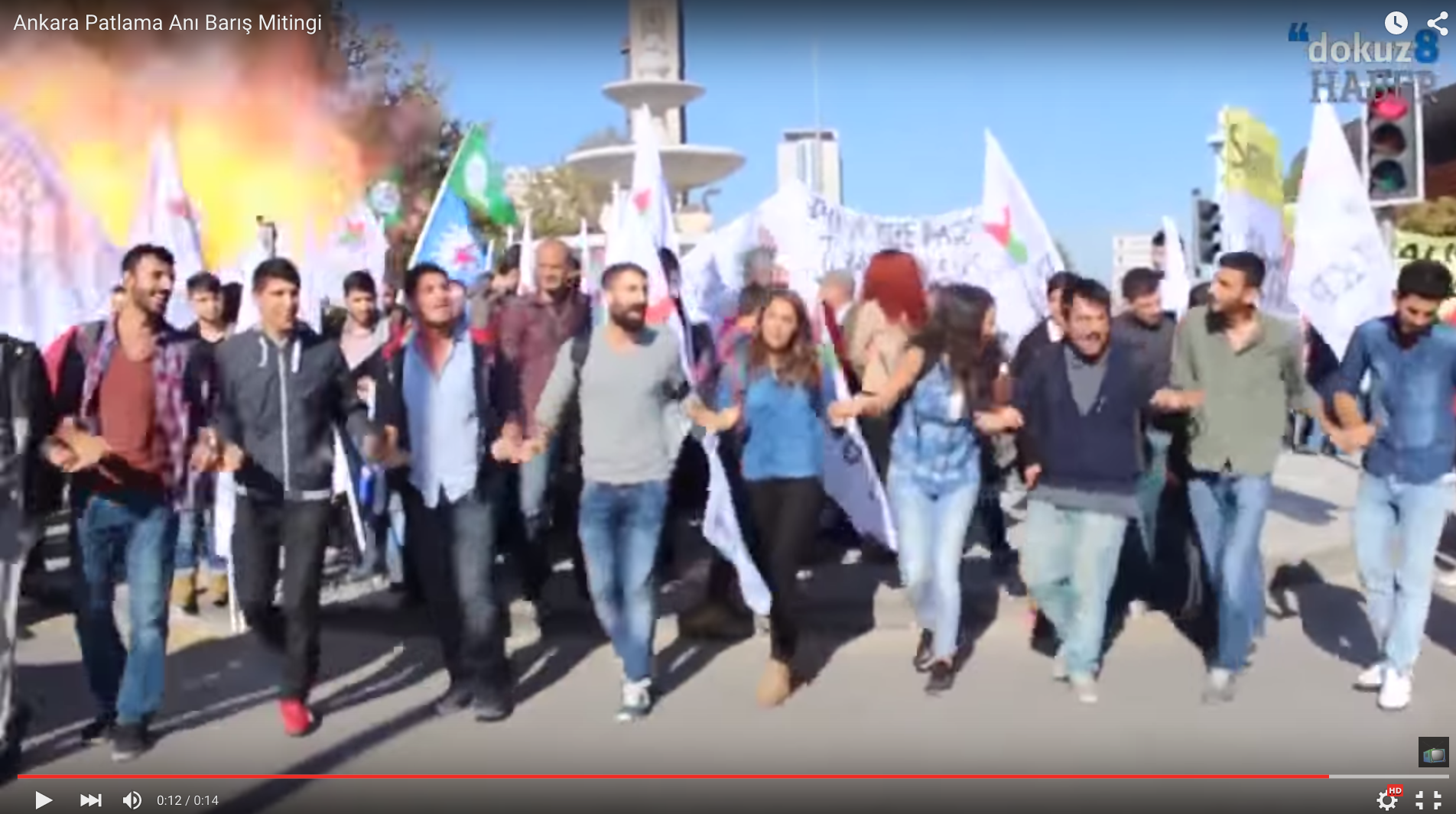 Two suicide bombs killed 95 people and injured at least 246 others in Turkey's deadliest ever terrorist attack at an anti-government rally in Ankara on October 10.

Turkish President Recep Tayyip Erdogan condemned the attacks as "terrorist acts", calling it a "loathsome attack that targeted our unity and our togetherness". No one has come foward to claim responsibility, with speculation blaming Islamic State (IS), the Kurdish Workers Party (PKK) or the government itself for the bombing.

The bombs were set off in the middle of a crowd near the city’s main train station where several hundred demonstrators had gathered to protest against the Erdogan government. The moment of the first explosion was caught on a mobile phone camera and indicated the size of the blast in the crowd of peaceful protestors. Other more graphic video shows the streets awash with blood and corpses as dazed relatives wandered amongst the dead crying. Demonstrators that were unhurt are shown amongst the carnage trying to resuscitate bloodied victims or tying tourniques on shattered limbs.

Social media carried pictures of the scene, with dozens of bodies hastily covered with campaign flags on Hipodrum Street in front of the station. Paramedics tended to the injured as a police helicopter circled overhead.

The two blasts went off almost simultaneously about 50m apart. "We have substantial intelligence that the attack [in Ankara] was undertaken by two suicide bombers," Prime Minister Ahmet Davutoglu said in a televised address to the nation.

At least 26 of the injured were in serious condition, Interior Minister Selami Altinok and Health Minister Mehmet Müezzinoğlur said in a statement releasing the number of causalities. Müezzinoğlu said 62 people died at the scene and 24 died in hospitals. However, those early estimates were being revised up by the hour as the scale of the tragedy became increasingly clear. 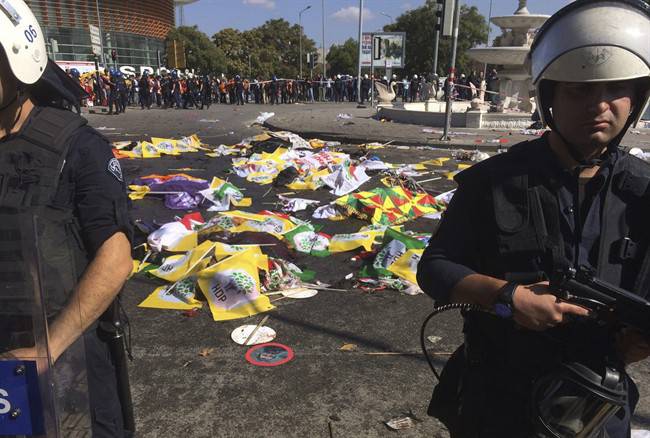 The government immediately shut down Twitter in Turkey to prevent the images and condemnation spreading.

Protestors were mainly from the pro-Kurdish and left-leaning Peoples’ Democratic Party (HDP), which has been battling with the ruling Justice and Development Party (AKP) in the run up to snap elections on November 1.

An estimated 14,000 demonstrators were calling for an end to the conflict between the government and the PKK. Turkey has been wracked with increasing levels of civil violence in recent weeks as the government tightens its grip in an effort to retake a majority in parliament that it lost in a surprise result in July’s general election. 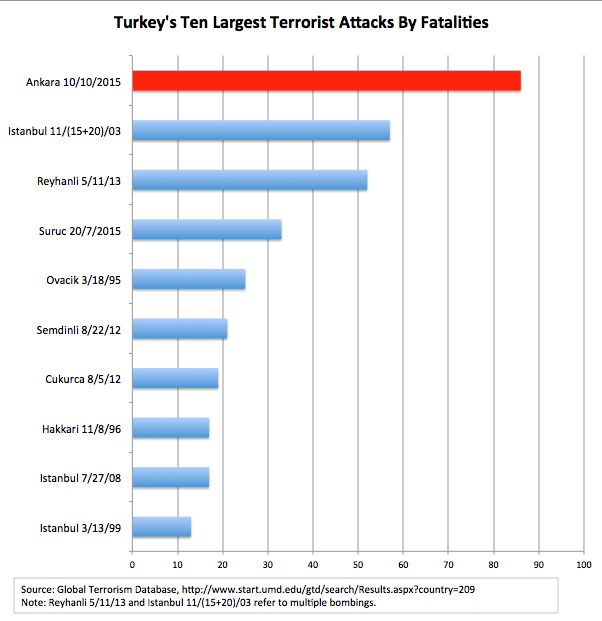 No clarity over perpetrator

No group has claimed responsibility although fingers were immediately pointed at both IS and the PKK.

Turkey has been wracked by rising social unrest in recent weeks as the upcoming snap elections have ratcheted up political tensions – particularly in Kurdish populated regions. It could even be that Erdogan's heavy handed tactics at home in the run up to the November poll have exacerbated tensions to the point where it has now provoked a major terrorist attack.

The use of purported suicide bombs, the choice of the capital as the target, and the sheer size of the explosion represent a significant scaling up of the violence.

Some commentators pointed the finger at the PKK, which has been in conflict with the government for years and ran a terror campaign that has killed thousands.

“It makes a lot of sense for PKK to be behind the attacks,” Dr Zenonas Tziarras, an Analyst on Security & Turkey at the Europe Levant Observatory of the University of Nicosia told bne IntelliNews.

“This week, one of the leading figures in the PKK, Bese Hozat, hinted that the rebel organisation was ready to sit at the negotiations table with Ankara again, if that increased HDP's chances in the November elections. But because of the escalation of tensions between the Turkish government and the PKK in recent months, it would have been difficult for Ankara to concede to renewed peace talks. So the attacks could be a tactic for the PKK to bring the government to the negotiations table. I am saying this in the context of what PKK has done after the bomb attacks, which was to proclaim a unilateral ceasefire. This might give the PKK the upper hand or the higher moral ground to pursue the peace negotiations with the government,” Dr Tziarras said.

The PKK denied it was responsible for the attacks and told the Firat news agency reported that it will “halt armed attacks against Turkey unless they are attacked".

“During this process, our guerrilla forces will avoid conducting planned actions, will be engaged in no activities apart from maintaining its current position, and make no attempts to hinder or harm the exercise of a fair and equal election,” the PKK said in a statement.

Most commentators have linked the attack instead to the civil war raging in Syria, where tensions have risen in the last week following the Russian decision to enter the conflict on the side of Syrian President Bashar al-Assad.

Relations with the US had improved somewhat recently after Ankara allowed the US to launch airstrikes against IS from the Incirlik Air Base in southern Turkey. This would be motive enough for IS to launch a high level attack. The bombing now raises the possibility that Turkey will be sucked deeper into the Syrian conflict.

“The other scenario is that this could be the work of the Islamic State, and that this may be a way for IS to instil fear, confusion and polarisation in Turkish society, which would by extension mean that Turkey would be less efficient when it comes with dealing with IS in Syria and Turkey. Ankara has recently begun to crack down on the IS in Turkey, by raiding focal points of IS in Turkey,” Dr Tziarras said. “However, it may also be something entirely different, such as a leftwing extremist attack, of the sort that took place on the US consulate in Istanbul in August.”

Erdogan has been attempting to manipulate the conflict in Syria to his advantage by ignoring the IS terrorists, which have been moving over the Turkish border, in the hope that they will fight the Kurds – one of the most effective fighting forces opposing IS on the ground.

Many Turks have also joined IS ranks, with a large number being recruited in Ankara. Turks may make up a third of IS, according to reports.

Earlier this year the government also did a deal with IS for the release of dozens of Turkish hostages seized in the Iraqi city of Mosul; the terms of the deal have not been released.

Davutoglu was on air within hours of the blast calling for three days of national mourning and urging the country to fight terrorism: "This is an attack that does not target a specific group; it is an attack on the entire nation and (an) attack on our unity. Turkey is a country that has managed to maintain peace in the region," he said.

The government almost immediately imposed a “temporary” news blackout on the story and banned images that showed the moment of the blasts, as well as the sharing or publishing “gruesome or bloody” pictures or "images that create a feeling of panic"." A government spokesman warned media organisations they could face a "full blackout" if they did not comply, the Associated Press reports.

Turkey has the worst press freedoms record of any country in Europe and the government was keen to limit the damage it may incur from possible blame for provoking the attack. The irony of the attack is the government has been using the anti-terrorist laws as its main tools to attack the media, including arresting two foreign reporters from the social media site Buzzfeed on anti-terror charges and their fixer, a Turkish national, remains in jail over a month later on the same charges. However, mostly the government has targeted media associated with Erdogan’s main rival the Gülen movement and its leader Turkish Islamic scholar and preacher Fethullah Gülen.

This perversion by politics of the fight against terrorism – which has always been a very real problem in Turkey – runs deeper and has also undermined the state ability to respond to the threat.

“Erdogan's anti-terrorism strategy has shifted from fighting both IS and the PKK earlier this summer, to focusing entirely on the PKK in recent months, which created a backlash in the form of armed attacks from the PKK, protests from the HDP, and social resistance,” Dr Tziarras said.

“The latest polls show that the AKP is below 38%, so Erdogan's polarisation of the Turkish society may result in the AKP getting below 40% in the elections, while the HDP might receive similar results as in June - around 13% of votes, and maintain its seats in the parliament. The fragmentation of power in Turkey will result in a period of instability in the country, which could drag Turkey into larger regional conflicts.”