United Wagon Company (UWC) has done what all Russian companies should do but few have managed: the railway wagon company was set up from scratch three years ago, its owners invested over a $1.5bn to build a state-of-the-art factory that last year became the biggest producer of the world-class wagons in Europe and the Commonwealth of Independent States (CIS), and it has left the rest of its Russian competition in the dust.

Russia has been investing heavily in reviving its railway system, spending tens of billions of dollars on the sector through the crisis years starting in 2008. The railway system remains the lifeblood of the Russian economy: 86% of all freight is transported by rail in Russia, compared with 48% in the US, 20% in China and 18% in the EU, according to Russian Railways (RZhD) statistics.

It has also completed a partial privatisation of the sector; the state-owned RZhD is still the monopolist in the passenger business, but a large part of the cargo and freight sector has been sold off, enabling private companies to flourish.

Planning began in 2005 when the owners of ICT Group decided to get into the rail wagon engineering business. It took two years of research to identify the best technology and negotiate the licence agreement with Standard Car Truck (currently part of Wabtec Corporation) – a 120-year-old company that basically invented the freight wagon, the Barber bogie. Then the plant in the Leningrad region was acquired, part of the old Kirov industrial complex that used to make the world's largest tractor and tank tracks, but had been shuttered in the 1990s. An entirely new facility was built on the site that finally went into production in 2012.

“Within a year the company had become one of the major players on the market and was the biggest producer of wagons in the CIS by the end of 2014,” says UWC's chief executive, Roman Savushkin, a fresh-faced young Russian who is one of the new generation that are increasingly running Russia's best firms.

ICT is not as well known as some of Russia's other conglomerates, but it has its fingers in many pies. It belongs to Russian tycoon Alexander Nesis, who is one of the few big businessmen to make the transition from being successful in the wild post-communist years of the 1990s to continue that success in the more sober following decades. The group also founded NOMOS Bank and Polymetal International, a FTSE 250-listed gold and silver producer. ICT has since sold control in NOMOS  to Otkritie Financial Corporation , and now owns a 9.8% stake in Otkritie. It has also reduced its stake in Polymetal to around 20%.

Its key asset is the Tikhvin Freight Car Building Plant (TVSZ), located in Tikhvin in the Leningrad region. It contains 20 super-efficient production lines that use over 100 robots, which wouldn’t look out of place on a production line in Dusseldorf or Detroit. The heavy investment was a bold move, but it has paid off. “Russia has a fleet of about 1.2mn wagons, but the technology was very low. Compared to the US, Russia's rolling stock was about 70 years behind,” says Savushkin.

The wagons cost about 50% more to lease as its local competition, but the higher cost is offset by the efficiency and capacity gains that the modern wagons provide. This plant has an annual production capacity of 16,000 innovative railcars (set to increase to 22,000 by 2016) and 30,000 car-sets of foundry. 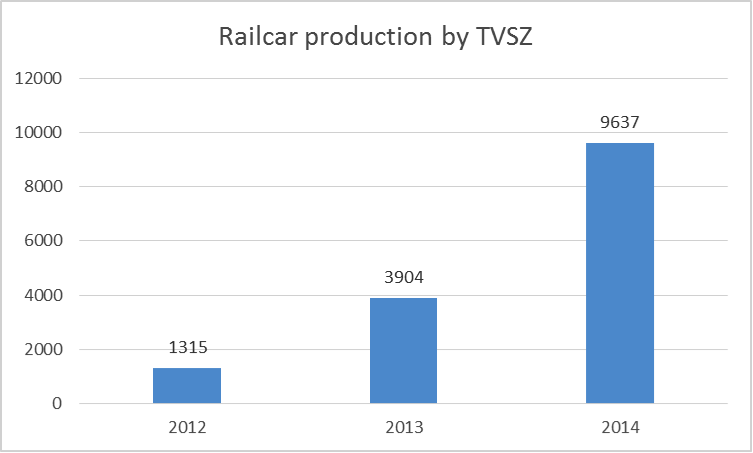 Other parts of the UWC group include NPC Springs, which produces heavy-duty rail springs for innovative bogies, the group’s own R&D centre, and a network of over 40 service depots across Russia, Kazakhstan and Belarus.

And it’s a market that is set to keep growing: the industry body INFOLine estimates that between 2015 and 2022 just over a third of all the wagons operating in Russia, or about 460,000 wagons, will have to be scrapped. Set this against the annual production of new cars that is currently running at about 50,000 a year, and producers are expecting the market to turn the corner soon. “The market has been tough, but we think we are at the bottom of the cycle now – the signs of new growth are already apparent,” says Savushkin.

But it is not just the modern production facilities that have made the company a success. UWC adopted international best practises in corporate governance from the outset and has three independent directors on its board. “Equal treatment of all shareholders and unconditional respect for their rights and interests is the foundation of UWC’s corporate governance system,” says Savushkin, adding the independent directors are the only members of the board on the company's Audit and Remuneration committees.

It has also developed an innovative business model that has allowed it to roll with the punches in the volatile market. “One of UWC’s key competitive advantages is its cyclical business model, which is unique among Russian companies. The financing, production and leasing elements of the cycle allow the company to easily adapt to changes in market conditions, meaning that it is able to secure predictable revenue streams, even in times of lower market demand,” says Savushkin.

The market for wagons has been a hard one in recent years. The sector was roaring in the run-up to the 2008 crisis as freight operating companies rapidly expanded and modernized their fleets. But the financial meltdown knocked the bottom out of the business and production slumped. A recovery in 2010-2012 collapsed again in 2013-2014 as the second wave of the current crisis hit. However, because of the strong demand for UWC’s high-tech wagons, the company continues to enjoy steady demand: Russia’s monthly production volume of new wagons had fallen in early 2015 to about 2,000 units per month, but up to 1,000 of those are being made by UWC. 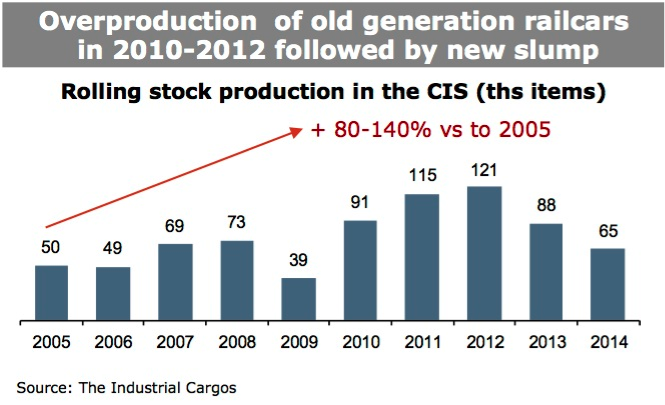 And the oversupply of wagons has led to a collapse in average leasing rates to below the cost of servicing the wagons in 2013, which has yet to recover. This slump has affected UWC less, because it can charge up to 55% more for its high quality and larger capacity wagons. 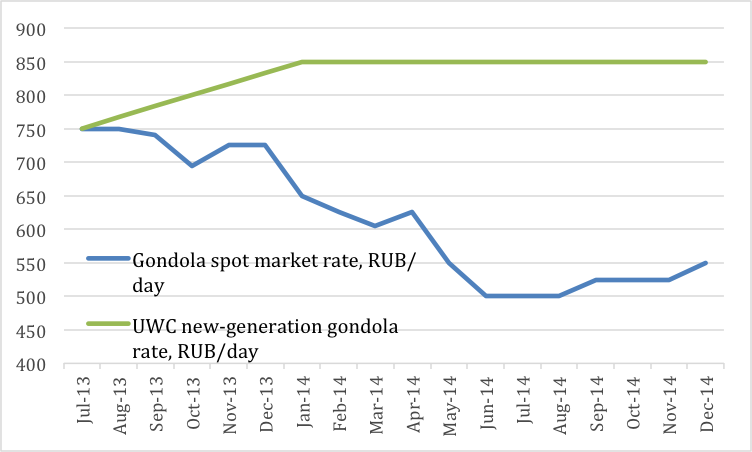 Life for cash-strapped freight operators has only been made worse by the financial sanctions imposed by the West and so UWC’s leasing operations are crucial to the rail transportation operators. “UWC provides its leasing services through RAIL1520, the common brand for UWC’s leasing companies and one of Russia’s five largest lessors in this space,” explains Savushkin.

The combination of leasing and direct sales means the utilization rate of UWC’s fleet is nearly 100%, which has kept the bottom line healthy even in the current economic downturn. “Despite the international sanctions and the poor economic conditions, exports of raw materials – oil, coal, iron ore and fertilizer – are actually still growing. Russian rail turnover is already rising. The increase is not as fast as in 2010, but it is positive,” notes Savushkin. “At the same time, the number of rail wagons being taken out of service means that soon there will be a deficit on the market and prices will recover.”

Based on management’s estimation, UWC generated consolidated IFRS revenue of RUB18bn (€335mn) in 2014, which is nearly a six-fold increase on the previous year's result. “The company intends to launch new, value-added products. In the medium-term, UWC plans to expand its range of innovative railcars to 60 models in 2017. The company’s strategy also includes diversifying its client base by both by geography and industry, as well as developing its service depots network and its own expertise in operating rolling stock. Gradually enhancing operating efficiency is another key area of focus for UWC,” the company has said.

The Russian state has also been doing its bit to support the sector. It has been promoting the domestic production of wagons by tightening the regulations on re-certifying old wagons, which is pushing companies to invest in new rolling stock by shortening the time span that old wagons can operate before requiring new certification and modernisation.

UWC also enjoys preferential borrowing rates. The company plans to invest $250mn over the next three years, three-quarters of which will be provided by bank loans. While commercial borrowing rates have soared to over 20%, making most investment projects unaffordable, as UWC works in a strategically important sector it is eligible for state interest rate subsidies that has kept its average borrowing cost at about 10%. “The government continues to support the sector by offering reduction in tariffs for empty runs and subsidies for the purchase of innovative wagons, which will bolster demand further,” says Savushkin.