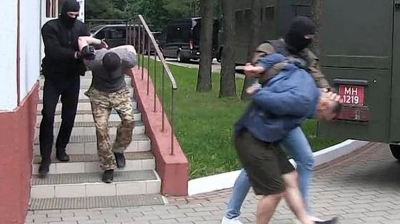 A group of alleged Russian mercenaries was arrested and deported in Minsk in July 2021. Now, a report says that they were lured there by Ukrainian military intelligence in a brazen operation ultimately designed to bring them before a Ukrainian court for their involvement in combat in the Donbas.
By bne IntelIiNews November 22, 2021

In the early hours of a sunny July morning in 2020, Belarussian special forces stormed a spa hotel outside Minsk. The 33 Russian nationals who emerged, hunched over with their hands in handcuffs, were accused by Belarussian authorities of belonging to Russia’s secretive private military group Wagner, and promptly deported. Now, a report by investigative journalism site Bellingcat says that the Russians were lured to Minsk as part of a sting operation orchestrated by Ukrainian military intelligence.

When the alleged mercenaries were discovered in Minsk, it unleashed a political scandal, the reverberations of which are still being felt today in the unpredictable relationship between Russia and Belarus. Belarussian President Lukashenko berated Russia, and Belarussian state media claimed that the fighters were in Minsk to sow the seeds of unrest as the country prepared for a controversial election the following month.

Yet the recent investigation by Bellingcat says that the fighters were in Minsk not on Russian orders, but as part of an elaborate sting operation designed to prove the involvement of the mercenary group in Russia’s annexation of Crimea.

The Wagner private military group has been implicated with Russian government-sponsored fighting and intelligence gathering in Ukraine, Syria, Libya and the Central African Republic. Ukraine’s military intelligence agency GUR MOU launched this operation in an effort to prove that the group had a presence in the Donbas region, and to bring some members before a Ukrainian court, the report says.

After discovering that idle fighters for the Wagner group were sent back to their home towns as they awaited re-deployment, the Ukrainian intelligence agency devised a fake mission, which it proposed to a group of mercenaries. Under the auspices of a Russian contractor, it offered them work in the Middle East guarding installations owned by state-owned oil giant Rosneft, the report says.

A fake recruiter, “Sergey Petrovich”, conducted interviews with the former operatives to bring them onto the team. Bellingcat claims to have access to hundreds of audio recordings of job “interviews” conducted by “Sergey Petrovich” with dozens of candidate mercenaries.

The fake posting organised by Ukrainian military intelligence was advertised as paying RUB225,000 (around $3,200), according to the report by Bellingcat.

As part of the interview process, candidates were asked to provide evidence of their service in Ukraine, and Bellingcat claims to have access to documents which prove that the Russian government provided support to and steered the operations of the ostensibly private Wagner PMC.

After a wave of coronavirus (COVID-19) lockdowns in Russia, and a series of complications which led to the fictitious death of the fictitious “Sergey Petrovich”, the operation finally moved into its Active Phase, designed with the ultimate goal of forcing a plane carrying Wagner militants over Ukraine to land, effecting their capture, and bringing them before a Ukrainian court.

But with Russian airports effectively in lockdown, this meant first travelling to nearby Minsk in Belarus, before being “deployed” via Istanbul. It was on this flight from Minsk to Istanbul that the plane carrying fighters to Belarus was intended to make an emergency landing in Kyiv after a “bomb threat” manufactured by the GUR MOU. Evidence for this allegation appeared to come from a TV interview with Ukrainian President Volodymyr Zelenskiy in June 2021, when he said of a Ukrainian operation: “And as to the fact that it failed – and once again I draw a parallel with what happened in Belarus – I think, thank God that we put our foot down on that important issue”, seemingly referring to the forced landing of a Ryanair flight carrying Belarussian blogger Roman Protasevich in Minsk the previous month.

However, the Active Phase of the operation was continually postponed as a series of problems cropped up, such as finding a flight to Istanbul which had enough free seats for all the mercenaries intended for capture and avoiding suspicion from the Belarussian KGB. The group of fighters was held in Minsk for weeks, and moved from a hotel in the centre to a spa hotel outside the city.

Just a day before their intended flight, the alleged fighters were arrested by a group of balaclava-clad Spetsnaz from Belarus’ KGB. Their luggage was ransacked in search of weapons, and they were led out of the hotel at gunpoint while state TV cameras broadcast footage of their detention.

In spite of President Zelenskiy personally lobbying for the extradition of the men to Ukraine in a phone call to President Lukashenko on 5 August 2020, they were ultimately returned to Russia after at least three Russian military and/or FSB planes made previously unannounced trips to Minsk in the week following the elections, according to Bellingcat.

While the Bellingcat report makes for an intriguing read, and the allegations, if true, point to a brazen operation from the Ukrainian intelligence agencies, the situation also has serious implications for relations between Russia and Belarus.

Belarus’ continued insistence that the mercenaries were there on Russian orders appears to be a significant blunder in the context of the alleged Ukrainian operation. With tensions between Belarus and Russia already high over Belarus’ spat with Poland and its threat to turn off Russian gas to Europe, this comes as another sign that the relations between the two nations are deteriorating.