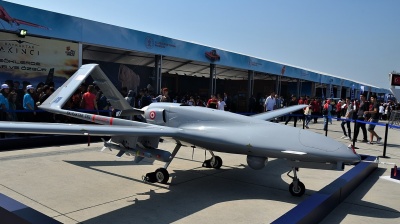 Ukraine is reportedly forming a joint venture company with Turkey to domestically produce as many as 48 of the Turkish Bayraktar TB2 combat drones that lately helped give Azerbaijan a decisive edge in the six-week Nagorno-Karabakh conflict.

News of the deal came from Vadym Ihorovych, general director of Ukrspetsexport, a state-owned Ukrainian defence manufacturer, who was interviewed by online publication Left Bank.

On October 20, bne IntelliNews told how Turkish President Recep Tayyip Erdogan informed Canadian Prime Minister Justin Trudeau of his indignation at an embargo placed on Canadian drone technology parts supplied to Turkey during a phone call that took place as he was having dinner with Ukrainian President Volodymyr Zelenskiy. Zelenskiy apparently at one point joined the call to have a chat with Trudeau, whose government suspended the parts exports after human rights groups raised concerns about the use of them in Turkish killer drones deployed by Azerbaijan in the Nagorno-Karabakh fighting.

The Bayraktar TB2 is manufactured by Turkey’s Baykar Makina, a manufacturer of unmanned aerial systems (UAS) and artificial intelligence systems. Turkey is among the world's most prolific users of killer drones. It became an emerging power in the lethal technology after circumventing a US export ban with the help of a missile component, a Hornet missile rack, developed in the UK.

“We are interested in the development of production of Bayraktar TB2 strike drones, as the Ministry of Defence of Ukraine … plans to purchase six to 12 such strike complexes in the near future,” Ihorovych said.

Black Sea Shield was currently focused on manufacturing the Scythian anti-tank guided missile, which Turkey has placed an order for, he added.

Under the deal with Nato member Turkey, Ukraine, according to Ihorovych, will be allowed to export Bayraktar TB2 drones to any country not already in a deal to receive such drones from Turkey.

“There is already an agreement with the Turkish side that we do not go to those countries where they are already present with these products—to the same Azerbaijan, for example,” Ihorovych said.

The drones built in Ukraine would be slightly different from the ones manufactured in Turkey, Ihorovych said.