Ukraine's president under fire over plan to expand lustration 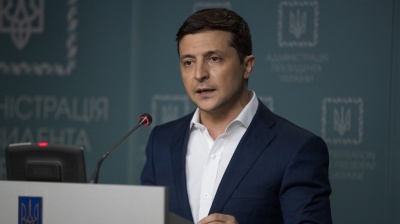 The current situation in Ukraine is not comparable to the one after the Revolution of Dignity, the G7 ambassadors said in a statement on July 12, reacting to a proposal by newly elected President Volodymyr Zelenskiy to expand the lustration of the nation's officials to those who held high-level posts following the 2014 Euromaidan, including former president Petro Poroshenko.

"Electoral change and political rotation are the norm in democracies. Indiscriminate bans on all participants in executive and legislative governance are not," read the statement of the G7 ambassadors.

"Since 2014, we have been appreciative of reform progress achieved in some important areas. While it is right to hold those guilty of abusing their office to account, the situation in Ukraine today is, in our conviction, not comparable to that after the Revolution of Dignity [in 2013-2014].”

Zelenskiy wants the lustration law to apply to Ukrainian MPs and government members of this period as well as others holding high-level positions, the president’s media office said in a statement on July 11.

"I communicate with officials of different levels on a daily basis and realise: it is a hopeless diagnosis. White and blue, red and white, orange, burgundy, pink — in fact, they are all the same. All of them do not care," the presidential media office quoted Zelenskiy as saying. "I think the least we can do now is to permanently deprive them all of the opportunities to participate in state governance."

The next day, July 12, draft amendments to the lustration law were submitted by Zelenskiy to the nation's parliament. According to the document, the ban on holding important official positions for 10 years should apply, specifically, to the governor of the National Bank of Ukraine (NBU), the head of the Antimonopoly Committee of Ukraine, head of the State Property Fund (FPF), the secretary of the National Security and Defence Council (NSDC) and heads of defence enterprises that held their positions from February 23, 2014 to May 19, 2019.

The statement from G7 ambassadors shows Zelenskiy’s proposed lustration bill has also caused concern outside Ukraine. Steven Pifer, former US ambassador to Ukraine, tweeted on July 12 that it was "an overreach". "G7 ambassadors in Ukraine are correct," he added.

Meanwhile, Poroshenko believes that Zelensky's idea to extend the effect of the law on lustration to Poroshenko-era public officials would result in vacating offices for the "fifth column".

"This [lustration] list is very much reminiscent of another list — the list of those on whom the aggressor state [Russia] has imposed sanctions, the people who defended Ukraine, who defended the Revolution of Dignity," he said on July 12. "This initiative has been inspired by anti-Ukrainian forces and is proof of an undisguised pro-Russian revanche, as some want to replace patriotic politicians with puppets obeying orders from the Kremlin."

According to Poroshenko, many representatives of the new modern Ukrainian politics who have proved their professionalism and love for Ukraine by real deeds could be lustrated in line with the declared criteria.

The former president mentioned, specifically, the leader of the Crimean Tatar people and a member of the Petro Poroshenko Bloc faction in the nation's parliament, Mustafa Jemilev; one of the leaders of Ukraine's nationalists, MP Dmytro Yarosh; the incumbent Defence Minister Stepan Poltorak; and Foreign Minister Pavlo Klimkin.

The inclusion of the NBU's head could fuel suspicions among Kyiv-based experts and reform-minded officials about the possible replacement of the NBU's governor, Yakiv Smolii, and his deputies after Zelenskiy's victory. The new president is widely considered to be sponsored and mentored by oligarch Ihor Kolomoisky, who is an implacable enemy of the NBU.

Kolomoisky is locked in a snowballing legal dispute over the December 2016 nationalisation of his bank, PrivatBank. On April 18, the Kyiv Administrative Court backed Kolomoisky's lawsuit, ruling that PrivatBank's nationalisation was unlawful. This decision had unsettled the likes of the International Monetary Fund (IMF), which saw the nationalisation of the bank as a major victory for the government’s efforts to clean up a rotten banking sector.

On April 8, Kolomoisky said that he was going to seek $2bn in compensation from the government. "I don't need [to get back] PrivatBank. But there was $2bn in capital there. Let them [the Ukrainian government] return it to me and there will be no problems," Kolomoisky said in an interview with the Ekonomichna Pravda online outlet.

On May 21, Zelenskiy appointed Andriy Bohdan as head of the presidential staff. Bohdan is a chief lawyer for Kolomoisky.

According to Ukrainian anti-corruption activists, Bohdan's appointment violates the incumbent lustration legislation because the official worked as the Government Commissioner for Anticorruption Policy in the Ukrainian government led by pro-Russian PM Mykola Azarov (2010-2014). During the Euromaidan, Bohdan did not resign.

In May, Kyiv-based NGO Public Lustration Committee filed a lawsuit in a local court over Bohdan's appointment. The organisation believes that the lustration law defines the position of the head of the presidential staff as the one which is subject to government cleansing measures (lustration).

On top of this, more than 25,000 Ukrainians have already signed the electronic petition for the dismissal of Bohdan from his post, which is the necessary minimum for the president to consider the issue. However, Zelenskiy refuses to dismiss Bohdan.

Horizon Capital returns as shareholder in major Romanian-Moldovan winemaker Purcari
Ukraine’s population falls behind Poland’s for the first time, electronic census says 5mn people lost since 2000
Ukraine’s domestic bond market off to a strong start in 2020 as yields fall below 10%