Ukraine's international reserves down 1% to $28.5bn in February 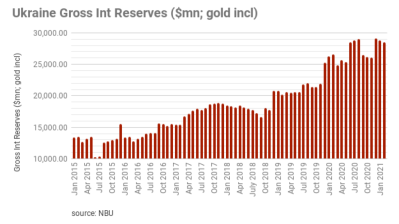 Ukraine’s gross international reserves (GIR) fell by 1% to $28.5bn due to redemption of debt obligations, the National Bank of Ukraine (NBU) reported on March 5 as cited by Unian.

The fall was due to the repayment of both international and domestic debt obligations, the regulator said, but the reduction was mitigated by strong inflows into the domestic OVDP bond market.

In addition, the government and the NBU in February repaid an equivalent of $213.1mn to the International Monetary Fund (IMF).

The NBU's interbank forex market transactions have also influenced foreign reserves, the regulator notes: "At the beginning of February, the FX supply exceeded demand on account of non-residents increasing the T-bills and bonds portfolio. During this period, the NBU bought $200mn to replenish international reserves. In the last two weeks of February, the FX market was balanced, and so the central bank did not intervene. The central bank did not intervene to sell foreign currency in February."  Another factor of influence was revaluation of financial instruments (due to changes in their market value and exchange rate fluctuations). Last month, the NBU says, the value of these instruments decreased by $87.5mn (in the equivalent).

International reserves are sufficient to cover 4.6 months of future imports – well above the three months economists consider is the minimum necessary to ensure the stability of the currency.

EU downgrades its estimate of Russian troops on Ukraine’s border to 100,000 but tensions remain high

EU downgrades its estimate of Russian troops on Ukraine’s border to 100,000 but tensions remain high
FPRI BMB Ukraine: How well could Ukraine defend itself against a Russian attack?
Unbundled: the Gas Transmission System Operator of Ukraine

Once again, export-oriented branches of Poland’s industrial segment fared the best in March.

Slovakia's death toll increased by 65% compared to the average level between 2016 and 2019, while Czechia posted a 40% growth in excess mortality amid severe wave of the coronavirus pandemic.

Polish PPI expansion picks up to 3.9% y/y in March

Shares in the Romanian chemical group are up 92% since the beginning of this year.

Polish industrial production jumps 18.9% y/y off low base and returning demand
8 hours ago
Czechia and Slovakia recorded the highest excess mortality rates in the EU in February
1 day ago
Polish PPI expansion picks up to 3.9% y/y in March
1 day ago
Moldova’s currency falls amid weak exports, no grants
2 days ago
Romania’s Chimcomplex shares soar by 29% on WSE listing news
2 days ago