Ukraine's GDP rises 4.1% in 3Q19, but consumption is slowing 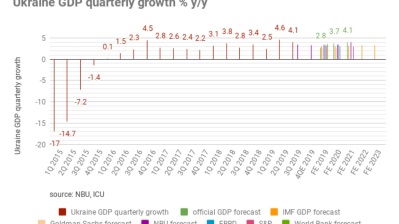 “It looks like private consumption growth, which is Ukraine's main economic driver, has started cooling. Meanwhile, the negative contribution of net exports to GDP softened in 3Q19, as real export growth significantly outpaced the growth of imports,” Evgeniya Akhtyrko of Concorde Capital said in a note.

“We expect economic growth to weaken significantly in 4Q19. The decline in manufacturing will intensify, while we expect mining output to switch into the red. Additionally, agricultural output is expected to be much weaker. We expect Ukraine’s GDP to have increased 3.5% y/y in 2019 (vs. 3.3% y/y growth in 2018),” Akhtyrko added.

Market interventions: the case of the US sanctions on Russia

Black Monday: Prague Stock Exchange saw the worst fall since mid-2016
Market interventions: the case of the US sanctions on Russia
Albania reports annual HICP inflation of 1.6% in January

The Polish economy will grow just 3.5% in 2020, said Poland’s biggest lender, the state-controlled PKO BP, trimming its previous forecast of 3.7%.

Ukraine retail sales grew by 12.5% year-on-year in real terms in January, keeping the same growth pace as in the previous month, the nation's state statistics service Ukrstat reported on February 20.

Analysts expect incomes to continue to rise this year as President Vladimir Putin has said on many occasions recently that the top priority is to boost income levels in 2020.