Ukraine’s economy – from bad to worse

Despite optimistic predictions that, in the wake of its International Monetary Fund (IMF) bailout, Ukraine had managed to "turn a corner", a macroeconomic update from the World Bank on April 29 shows that Ukraine's economy is continuing to perform worse than even the already dire forecasts.

After initially predicting that Ukraine's economy would shrink by "only" 2.3% in 2015, the World Bank sharply downgraded its full-year GDP projection to a 7.5% loss. If true, this year would end up being even worse than the already painful 6.8% decline that Ukraine registered during 2014.

The full report makes for harrowing reading. In 2014 virtually the only bright spot in Ukraine’s economy was agriculture, which managed to eke out 2.8% annual growth. The story in all other sectors ranged from the bad to the disastrous. Industrial production fell by 10%, wholesale trade by 15% and construction by more than 20%.

The fact that investment declined far more sharply than either industrial production or consumption would suggest (at least to your humble author) that the bank’s prediction of a return to 2% growth in 2016 and then sustained growth after that is overly optimistic. So long as investment is in free-fall (and there are no signs that it’s started to rebound in 2015), future Ukrainian output will be negatively impacted. Indeed, given the enormous physical damage to the country’s economic infrastructure, particularly in the east, total investment would have to sharply increase merely to get Ukraine back to the status quo ante.

Reading through the litany of carnage, the crisis that Ukraine is currently experiencing looks less like a temporary adverse shock and more like a permanent (negative) change in economic trajectory. The report repeatedly states that additional reform is the secret to escaping from the current downward spiral, but it’s really hard to see how Ukraine gets to there (stable economic growth) from here (bankruptcy, recession and borderline economic chaos).

Consider, as one example, the devaluation of the hryvnia. By sharply increasing the costs of imports and making Ukrainian exports much more cost-competitive, the devaluation that occurred during 2014 should have brought Ukraine’s current account back into balance. For a little while, at least, this is exactly what happened; by August 2014 Ukraine’s current account deficit was basically at zero.

However, as the bank noted, additional “conflict-related disruptions” in export industries and an increased reliance on imported natural gas (Ukraine’s domestic coal industry is in ruins, with production down by roughly 60%) prevented the adjustment from taking hold. Despite being essentially out of money – by the end of February Kyiv’s foreign currency reserves were down to less than one month’s worth of import coverage – Ukraine still ran a more than 4% current account deficit during 2014. The bank projects a more modest deficit of 2.4% in 2015, but full adjustment won’t occur until 2016 at the absolute earliest (and that is assuming no resumption of the fighting in the Donbas region of eastern Ukraine).

As bleak as the World Bank’s conclusions are (and they are quite bleak!), the report notes that the risks are “tilted to the downside”. Any “further escalation of the conflict” will deepen the current economic decline and “delay recovery” even further. Additionally, “further deterioration in trade relations with Russia” could result in a “prolonged recession”, since the reorientation of Ukrainian exports will require both time and investment, both of which are in desperately short supply.

The above hints at a troubling conclusion about Ukraine’s future that the World Bank doesn’t explicitly state, but that is nonetheless plainly visible if you read between the lines: Russia holds nearly all of the cards. If fighting in the east flares back up and if Ukrainian exports to Russia do not recover, then Ukraine could very well enter a years-long recession that would likely cripple its nascent move towards the EU. Given the lengths to which Russia has already gone to prevent Ukraine from integrating with the West, one does not need a particularly active imagination to think that it will use the considerable power at its disposal to worsen Ukraine’s already existential economic crisis.

The West has the ability to prevent this outcome, but doing so will require a direct infusion of financial resources that, so far, has proven politically impossible. If things continue on their current trajectory, then, Ukraine’s short- and medium-term future will likely be one not of “convergence” with the West, but of a downward spiral into depression and collapse. 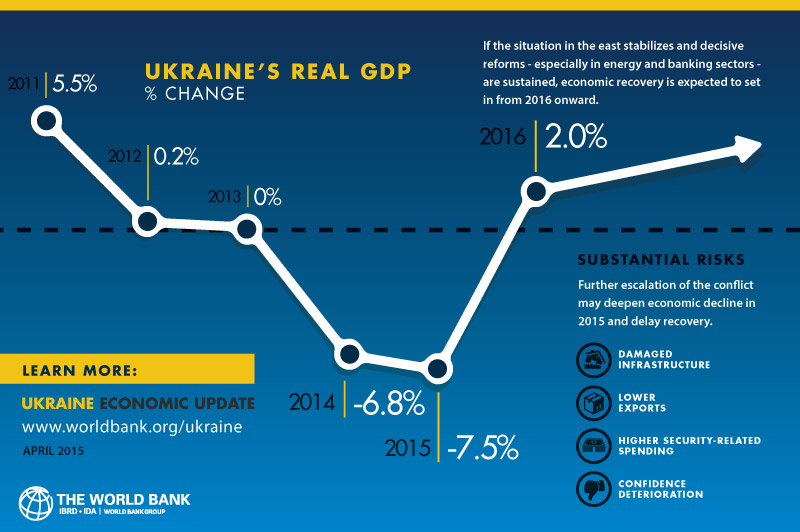