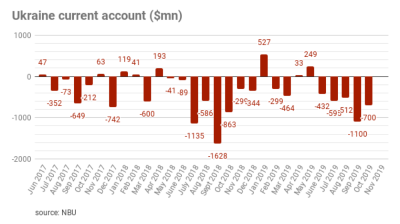 Ukraine’s current account (C/A) deficit shrank to $0.7bn in October from $1.1bn in September due to a positive switch in the primary income balance, the National Bank of Ukraine (NBU) reported on November 30.

Primary income switched to a $385mn surplus from a $102mn deficit in September on a decrease of coupon payments on international Eurobonds.