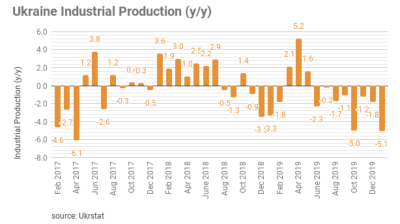 Ukraine's economy is off to a poor start to 2020 with industrial production down 5.1% y/y in January even before the worst of the coronavirus fears hit confidence
By bne IntelliNews February 28, 2020

Evgeniya Akhtyrko at Kyiv-based consultancy Concorde Capital believes that the decline in Ukraine’s industry slowed in January. "The renewed growth in food production and accelerated growth in chemical industry were not enough to stop the decline in manufacturing where the drop in metallurgy and machinery remained almost as strong as in December," she added in a note on February 27.

"The decline in coal mining and supply of electricity and natural gas is fostered by abnormally warm weather in Ukraine," Akhtyrko wrote, adding that the decline in Ukraine’s industry is likely the extend through most of the first half of the year as we do not see the factors which would prompt a faster recovery.

KYIV BLOG: How is Ukraine going to pay for dealing with the coronavirus stop-shock?

KYIV BLOG: How is Ukraine going to pay for dealing with the coronavirus stop-shock?
Ukraine's Economics Ministry forecasts 3.9% economic contraction in 2020
Just how painful would a sovereign debt default be for Ukraine?

Central bank seen as set to opt for more easing but all eyes are on floundering lira. If it falls much further it could limit room for policy support.

The IHS Markit Russia Services Purchasing Index (PMI) index crashed to a new all-time low as the double whammy of an oil price collapse and the stop-shock caused by the coronavirus pandemic hit the services industry.

The coronavirus pandemic drove the decline of the indicator, which is likely the first in a series of steeply deteriorated macroeconomic readings to come out this month.

Oxford University researchers look at the steps taken to contain the spread of COVID-19.

Ukraine’s Economy Ministry has dramatically downgraded its 2020 macroeconomic forecast and predicts a 3.9% y/y contraction in the economy in 2020, down from its previous prediction of 3.7% y/y growth at the start of the month.

Oil price crash takes 0.5pp off Turkey’s inflation rate
9 hours ago
Russia Services PMI index crashes to a new all-time low of 37.1 in March
1 day ago
Poland’s PMI the first indicator pummelled by COVID-19
3 days ago
Balkans have some of the world’s strictest anti-coronavirus measures
4 days ago
Ukraine's Economics Ministry forecasts 3.9% economic contraction in 2020
5 days ago