Ukraine blows up bridge to Transnistria after Tiraspol reasserts its independence 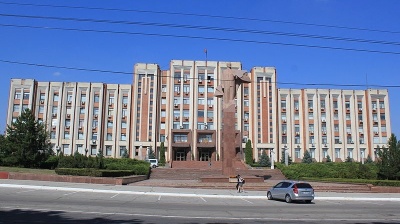 Reports from the Moldovan separatist republic of Transnistria indicate Ukraine has blown up a railway bridge that would have helped the Russian military in the unrecognised republic cross the border into Ukraine.

Since Russia launched its invasion of Ukraine there has been concern that Transnistria, where Russian troops are stationed, could become involved in the conflict.

The NovostiPMR agency in Transnistria reported two explosions on the Ukrainian side of the border on March 4, after the Russia-backed separatists in Tiraspol issued a statement reasserting the tiny republic’s independence. The explosions damaged the railway bridge across the Kuchurgan River, putting it out of operation.

Earlier on March 4, the foreign ministry of Transnistria accused Chisinau of ignoring the negotiations aimed at reaching a settlement of the still unresolved Transnistria conflict with its decision to apply for European Union membership, the ministry said in a statement, that also called once again for its international recognition.

The call from the separatist region — similar to those from the self-declared republics in Ukraine’s Donbas region before Russia’s invasion — encouraged speculation about the territory being used as a future staging point in Russia’s military invasion of Ukraine.

The Moldovan authorities have expressed less concern, though. While condemning the invasion of Ukraine they have taken a more cautious tone on Transnistria and refused to join sanctions.

The immediate effect of Transnistria’s statement seems to be that Transnistria pulls out of the settlement negotiations and asks for international recognition on the grounds of the two independence referenda carried out in 1990 and 2006.

Sandu only assured citizens that “no special military activity” is visible in the separatist region — rejecting rumours regarding the possible activation of the 1,400 Russian troops stationed there, in the context of the conflict in Ukraine.

In the only response of a Moldovan official to Tiraspol’s rather radical statement, Interior Minister Ana Revenco expressed no concern, stating that her government’s priority now is addressing the large inflow of refugees from Ukraine.

“Transnistria keeps declaring its independence. Nothing new,” she said.

In the statement, the foreign minister of Transnistria says it “treats with understanding” the decision of the leadership of “the neighbouring republic” (Moldova) to apply for EU membership. But this decision “radically changes” the circumstances of the final settlement of Moldovan-Transnistrian relations in the sense of putting an end to the settlement process.

“The submission of an application by the Republic of Moldova for accession to the EU in the context of a long-term unresolved conflict between Transnistria and Moldova, without taking into account the opinion [of Transnistria] and outside the framework of consultations with the Transnistrian side, while completely ignoring the discussion of this issue in existing negotiation formats, including the international platform of the ‘Permanent Conference’, puts an end to the settlement process, which requires urgent international legal formalisation,” the statement reads.

Transnistria’s Ministry of Foreign Affairs said it addressed the United Nations, the Organization for Security and Cooperation in Europe (OSCE), the mediators and observers in the negotiation process and the international community as a whole with a request to “recognise the reality that has existed for more than thirty years in the form of the Pridnestrovian Moldavian Republic [Transnistria], to ensure respect for the right of the Pridnestrovian people to self-determination” and establish diplomatic relations with Transnistria.

Meanwhile, on March 6, US Secretary of State Antony Blinken visited Moldova and stressed that the US supports the country’s territorial integrity, as well as announcing financial support for Moldova as part of the $2.7bn regional support package.

Blinken said that the US will provide Moldova with the same support it provides to Ukraine if confronted with Russian aggression, namely by mobilising the international response that is isolating Russia and hurting its economy.

"Whenever and wherever that aggression might appear, we'll do the same thing," he said.

Notably, the topic was touched at the request of journalists and not Moldovan officials, who avoided delicate issues such as the sanctions against Russia (which Moldova hasn't joined) or the threat posed by Transnistria, which Sandu played down during a joint press conference with Blinken.

"We support the 5+2 OSCE negotiations in order to find a comprehensive solution to the Transnistrian conflict that respects the territorial integrity of the Republic of Moldova and a special status," Blinken added.