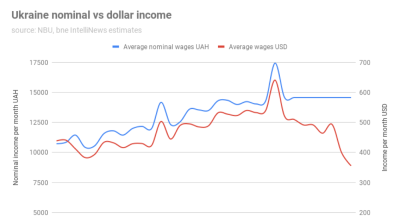 Even assuming no fall in wages since the war started in February, the dollar value of the average income in Ukraine has crashed by a quarter due to the devaluation of the hryvnia and wages are now some $150 less than in Moldova, which was the poorest country in Europe. / bne IntelliNews
By bne IntelliNews August 3, 2022

Wages in Ukraine decreased to UAH14,577 per month in January from UAH17,453 in December of 2021, according to the National Bank of Ukraine's (NBU) most recent data available.

Wages in Ukraine have been rising faster than those in Russia in recent years, but quite apart from the problems that a war with Russia has caused business, the devaluation of the hryvnia in the last months has once again make Ukraine the poorest country in Europe, with wages $150 lower than those in Moldova, in dollar terms.

This is not the first time that Ukraine has won this dubious accolade. In 2018 the International Monetary Fund (IMF) briefly ranked Ukraine as the poorest country in its October World Economic Outlook, when it estimated per capita income at current prices in US dollar terms stood at $2,964.193, just behind that of Moldova with $3,226.717 and bottom of the list. However, after the 2019 Ukrainian election of President Volodymyr Zelenskiy incomes began to lift and Ukraine overtook Moldova and started to grow.

With at least a third of Ukraine’s business in limbo due to the ongoing military operations, average wages are likely to have fallen. However, Ukrstat has not released any fresh data on incomes since January.

Following the invasion of Ukraine at the end of February, the very sharp devaluation of the ruble hit Russian wages, which tumbled to $601 in March, but the rapid rebound of the ruble, thanks to the fast action by the Central Bank of Russia (CBR), has lifted Russian average incomes in dollar terms again to $943 as of May, the last data available.

Residents of eastern Europe are very conscious of the dollar value of their income, as most people with savings keep a significant proportion in foreign exchange to protect it from the persistent currency volatility. Devaluations also send the cost of widespread imports soaring.

Ukrainian have suffered from very similar problems, as the country Ukraine is running out of money and the central bank has been unable to hold up the value of the hryvnia. The situation has been made worse by the approximately 4mn refugees living in other European countries that have been withdrawing foreign exchange using bank cards to pay for their lives outside Ukraine, in effect fuelling capital flight.

Even if you assume that the nominal salaries have remained unchanged, the hryvnia has fallen from UAH28.4 on average in January to UAH37 as of the end of July after the NBU devalued the hryvnia by 25% on July 21.

That means January’s nominal salary dropped to $394 in dollar terms following the devaluation, assuming no hryvnia pay rises or decreases since the start of the year. (chart)

The pain from the fall in the dollar value of incomes has been doubly compounded, as even if salaries have not been cut the purchasing power of the hryvnia has been eroded by almost as much again caused by the devaluation thanks to run away inflation. Last month inflation rose to 21.5% year on year, leading the NBU to hike the prime interest rates to 25% on June 2 in an effort to curb prices rises – inflation at this level is the equivalent of a 20% pay cut even if the nominal value  of wages remains the same. (chart)

And the hryvnia has not stopped falling. According to latest reports from Kyiv, the cash rate has since dropped further in the last week to UAH41 to the dollar, which has further reduced the dollar value of wages to $355 per month, or almost $150 less than the average wage in Moldova.

CENUSA: Bringing Ukraine, Moldova and Georgia closer to the EU: a multi-speed progress.
KYIV BLOG: Ukraine has already joined Europe, just not on paper
NEMETHY: How the Battle for Ukraine may change Europe