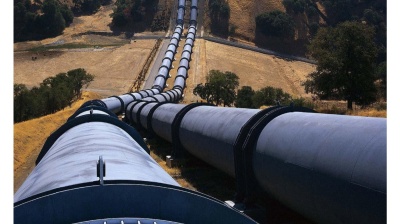 Ukraine has offered to cut its transit fees in half if Russia's Gazprom agrees to extend the current deal for another 15 years. / wiki
By bne IntelliNews November 24, 2021

Ukraine has asked Russia’s gas behemoth Gazprom to extend the current gas transit deal that expires in 2024 for another 15 years and offered to cut transit fees in half.

Ukraine’s Prime Minister Denis Shmyhal said in an interview with Radio Svoboda on November 21 that Ukraine wants to extend the transit contract with Gazprom and is currently negotiating with its European partners.

The Russian government reported the start of talks on a new transit deal on September 8 held by Russian Deputy Prime Minister Alexander Novak and the German government's commissioner for gas transit through Ukraine, Georg Graf Waldersee.

"Germany has been, is and will remain the main partner for the Russian fuel and energy complex in the European direction," Novak said at the time.

According to the Prime Minister, Ukraine has proposed increasing the gas transits beyond the terms of the contract to another 55bn cubic metres a year. Gazprom signed off on a new transit deal at the last minute in December 2019 that commits the Russian gas giant to send 40 bcm via Ukraine’s Druzhba pipeline until 2024.

Currently Gazprom has been sticking scrupulously to the deal that will earn Ukraine’s pipeline operator, the Gas Transmission System Operator of Ukraine (GTSOU), some $2bn in fees this year. But the Russian gas company is sending exactly the amounts stipulated in the deal and no more, despite the gas shortage crisis in Northern Europe. At the same time, Gazprom has increased exports to Europe, mostly via the southern TurkStream route that came online in January.

"We are ready to transit this [55 bcm] surplus at a price twice lower than in the current contract. This once again confirms the ability of the Ukrainian GTSOU to transport and transit twice as much as currently contracted, the system is prepared for this," said Shmyhal.

Sergiy Makogon, CEO of GTSOU, told bne IntelliNews in an exclusive interview earlier this year that if Russia stops using Ukraine as a transit route after 2024 then Ukraine would probably decommission a large part of the network, which is expensive to maintain.

Russian President Vladimir Putin told German Chancellor Angela Merkel in September that Russia is open to increasing gas exports to Europe and would happily send more gas via Ukraine if Europe would commit to sufficiently large volumes with long-term contracts.

Currently Russia exports just under 200 bcm to Europe a year, of which around 100 bcm go via the central and northern pipeline routes that include both the controversial Nord Stream pipelines and the Ukrainian system.

Nord Stream 1 has a nameplate capacity of some 55 bcm and if Nord Stream 2 is approved then it will double the capacity of that route and be able to carry the majority of Russia’s gas exports via the northern route to Europe without making use of the Ukrainian route at all.

Putin’s offer to Merkel suggests Russia wants Europe to increase its commitment to buy gas. Makogon told bne IntelliNews that Russia would have to send a minimum of 30 bcm via Ukraine each year to keep the Ukrainian pipe network commercially viable.

However, the EU is reluctant to increase its commitment, as its Green Deal means Europe is expecting demand for gas to decline in the coming decade as it further transitions to using renewable sources for its power needs. Merkel suggested in her September meeting with Putin that European gas demand from Russia could fall to zero over the next 25 years.

Shmyhal noted that Ukrainian gas storage facilities have a volume of 33 bcm, but only about 20-24 bcm are used.

"We can use our gas storage facilities as a European safe to store additional volumes of gas for Europe in winter. To do this, we proposed to unite our efforts with some or all European partners and create a gas fund that will stabilise possible crises, differences in the winter, "said Shmyhal.

The idea should have some appeal, as prices spiked this summer after it became clear Europe did not have enough gas in reserve to get through the winter after LNG supplies that could have covered the shortfall were drawn off to Asian markets, where prices for gas are even higher than in Europe. That has led to talk in the EU of creating a strategic gas reserve to prevent the supply crunch repeating itself.