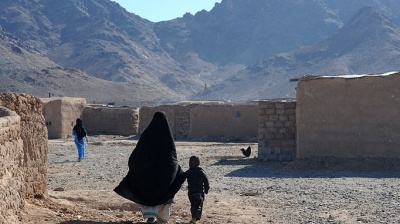 Many routes out of Afghanistan involve a perilous journey.
By bne IntelIiNews October 20, 2021

Afghan interpreters left behind during the evacuation of Afghanistan by UK military and diplomatic personnel have accused the British government of “playing with their lives” after it advised them to escape the country on their own, openDemocracy has reported.

In emails seen by the media outlet, the UK Ministry of Defence (MoD) told them to “actively consider evacuating to a third country”, but warned that the journey is “potentially dangerous”.

“They’re asking us to risk our lives by attempting to cross the border,” Amina, a former UK embassy worker, was quoted as saying.

Quite apart from the fact that anyone attempting to leave Afghanistan almost certainly faces having to negotiate checkpoints of the Islamist fundamentalist Taliban regime that took control of the war-torn country in mid-August, there is the added difficulty that Afghanistan’s borders with Pakistan, Uzbekistan, Tajikistan and Turkmenistan are closed. By all accounts, many parts of the border with Tajikistan are regarded as porous, but the Tajiks have greatly beefed up border security in the past two months. Afghanistan’s other borders are with Iran and China, but journeys to those frontiers are typically perilous and neither Tehran nor Beijing are encouraging Afghans to arrive and seek asylum. China, in particular, looks determined to tightly seal its short, mountainous border with Afghanistan.

Turkey, meanwhile, is looking less and less attractive to Afghans looking to escape to the country via Iran, with Human Rights Watch (HRW) alleging last week that Turkish border forces have been literally throwing some refugees back across the frontier after dishing out beatings, and work proceeding on completing a modular wall along more open parts of the border.

Despite the precarious situation, the UK’s MoD was said to have informed Afghans eligible for evacuation that if they made it across the border then “support and your onward journey to the United Kingdom can be arranged by the High Commission or Embassy staff”.

“To be told to put themselves in danger by moving to a neighbouring country without any assistance from the UK feels morally indefensible,” Andrew Kidd, a former civil servant who managed the UK Aid programme in Kabul for three years, was reported as saying.

More than 8,000 Afghans and their families were evacuated by the UK from Kabul during Operation Pitting in August. But British defence secretary, Ben Wallace conceded last month that more than 1,200 Afghans did not make it onto an evacuation flight.

Several Afghans in hiding from the Taliban in Kabul told openDemocracy that the UK government's advice to attempt to leave at their own risk was “totally mad”.

Sayed, a former military interpreter, was quoted as saying that there were several Taliban checkpoints on the way to the Pakistan border and that anyone travelling there would raise suspicions that they worked for a foreign government.

“I would be completely in danger if I tried,” he said.

Abdullah, a former educator, told how his family and five others tried to follow the British advice but were turned away at the border.

“It’s completely contradictory advice. We risked our lives,” he said. “We went to the border after we were told the British High Commission in Pakistan will facilitate your crossing. We waited for days, but this didn't happen and we were so disappointed and discouraged.”

“We passed through several Taliban checkpoints on the way. Every time we were stopped they were asking different questions. If they discovered our identities, our lives would be seriously in danger.”

None of the people who spoke to openDemocracy had been given documentation by the UK to help them cross the border.

He added: “Even fewer have the same moral priorities.”

A Ministry of Defence spokesperson told openDemocracy: “The RAF has airlifted 35 people who have left Afghanistan to the UK, including Afghans and British nationals. This marks the beginning of what will be a longstanding effort to relocate people and we are working towards more flights over the coming weeks.”

*openDemocracy changed the names of interviewees to protect their anonymity.

Nazarbayev ousted from power, search for Kazakhstan’s vanished ‘Leader of the Nation’ centres on Switzerland, Russia and China

bneGREEN: NDCs need to be rapidly improved to get near 1.5°C target
Nazarbayev ousted from power, search for Kazakhstan’s vanished ‘Leader of the Nation’ centres on Switzerland, Russia and China
Mongolian traders in disarray as China’s zero-Covid policy chokes business