Turkmenistan is suffering an economic crisis of its own making 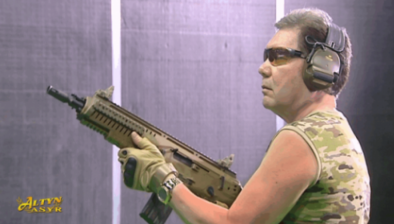 Turkmenistan's escentric President Gurbanguly Berdimuhamedov has driven the gas-rich country into the ground
By Sam Bhutia for Eurasianet September 8, 2019 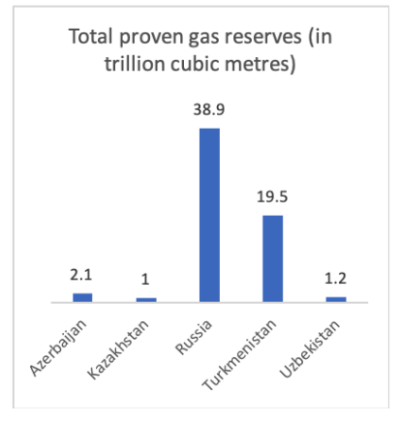 tan is tremendously rich in natural resources, with around 10% of the world’s total gas reserves.

But the news trickling out of the isolated country does not paint a rosy economic picture. For more than two years, inflation has been stubbornly high (jumping to almost 300% by one estimate last year). There have been consistent reports of food shortages and breadlines. This year the government scrapped free utilities, breaking a decades-long social contract. Public sector wages are going unpaid.

TM gas reserves So what has gone wrong? Turkmenistan suffers because it hasn’t diversified. Its immediate neighbors all have ample energy reserves, so they’re not interested in buying Turkmenistan’s chief export: gas.

Gas buyers are, instead, far away. And the Central Asia-China gas pipeline, through, which Turkmenistan exports gas to China, its most important buyer, is close to maximum capacity.

Ashgabat has also been lousy managing other trade partners. Gas exports to Iran have been routinely suspended over price spats; a newish railroad connecting the two remains woefully underused. Gas sales to Russia only recently resumed after a 40-month hiatus. India is a major energy consumer. However, the logistics of exporting gas to India is complicated by Afghanistan. What about exporting gas in LNG form? That’s how India imports most gas from the Middle East. But this would mean using Iranian ports.

Despite these geographic challenges, Turkmenistan’s economic misfortunes are largely its own doing.

A cornerstone of Ashgabat’s economic policy in recent years has been to defend its overvalued currency, the manat. To achieve this, the government has clamped down on imported goods with draconian import controls and by limiting access to hard currency.

For starters, this has created severe shortages of basic goods as imports have nosedived: According to the IMF total goods imports fell from $8.4bn in 2014 to $2.5bn in 2018, a staggering 70% decline.

Turkmenistan imports And second, though officials often talk about diversifying from gas, a propped-up manat hurts its few other exports because anything Turkmenistan sells abroad is artificially expensive on global markets.

Now why would a government work so hard to maintain its currency peg? An overvalued currency means that one Turkmen manat translates into more dollars than it would if it were depreciated. This policy favors anyone with money to transfer out of the country. In other words, an overvalued manat favors someone wanting to buy dollars and send them abroad – exactly the kind of pursuit often attributed to senior Turkmen officials. 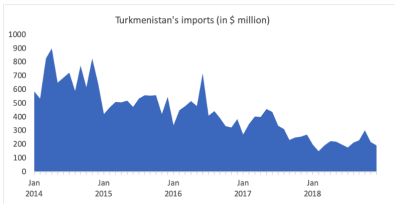 This piece first appeared in Eurasianet here. Sam Bhutia is an economist specializing in the former Soviet Union.

The crisis that Russian banks suffered in 2014-2016 is well and truly over as the sector had its second full year of clear profits in 2019, the Central Bank of Russia (CBR) reported on January 28.

Who's who in the new Russian government

On January 21 Russian President Vladimir Putin approved the personnel of the new government of Mikhail Mishustin. There are many new figures, including six new deputy prime ministers and eight ministers that did not work in Dmitry Medvedev’s governme