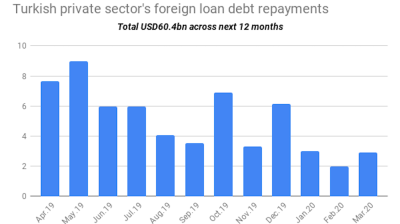 The Turkish private sector’s loan debt repayment obligations on a remaining maturity basis for the next one-year period stood at $60.4bn at the end of March, down 3% m/m from end-February’s $62bn, central bank data showed on May 16.

The figure was as high as $70.5bn at the end of July 2018, prior to Turkey’s currency crisis that reached its peak in August. The total has gradually declined since then.

Turkish private lenders have obligations to repay $35.7bn in foreign loans between April 2019 and April 2020, while non-bank financial companies are on the hook for $6.1bn and non-financial private corps are scheduled to repay $18.6bn.

Private transportation companies’ outstanding long-term foreign loans increased by 1% q/q to $17.6bn at end-March from $17.4bn at end-December. The figure stood at $16.4bn at end-2017.

Bigger picture
Meanwhile, the Turkish central bank remains under scrutiny for its use of currency swaps to flatter its level of held FX reserves and for selling USD via public lenders to curb the depreciation in the Turkish lira, but some analysts say the focus should be on the bigger picture.

“The focus on the use of swaps risks missing the bigger picture. Regardless of which measure of FX reserves is used, Turkey’s external position is among the worst in the emerging world. While the current account position has improved, external debts of $177bn (equal to around 24% of GDP) still need to be serviced over the next twelve months. This leaves the lira, which is key to any monetary policy moves, vulnerable to bouts of risk aversion. There are a number of flashpoints on the horizon,” Jason Tuvey of Capital Economics said on April 26 in a research note.

If global growth continues to disappoint, as Capital expects, risk appetite is likely to wane. “Deposit dollarisation in Turkey’s banking sector is becoming increasingly prevalent. And tensions with the US are mounting again, which could ultimately lead to the imposition of fresh sanctions on Turkey,” Tuvey added.

“One lesson from the 2018 EM sell-off is that global capital markets have grown unwilling to fund heavily credit-dependent growth models. Turkey was in the crosshairs because of a large credit expansion in 2017 that widened the current account deficit to unsustainable levels... Depreciation pressure on the Turkish Lira has recently been rising again, a direct consequence of another ramp up in credit in Q1, which this time has been led by state banks. The resulting credit impulse to the economy is larger in our models than in 2017, once again widening the current account deficit and—as a result—destabilizing the currency,” it added.

Turkey sees unexpected rise in inflation as lira weakness pushes up prices
11 hours ago
Russia's services PMI bounces back to 35.9 in May from a record low of 12.9% in April, but business still contracting
16 hours ago
Easing of lockdowns offers hope to emerging Europe’s COVID-struck economies
1 day ago
Kazakh manufacturing ekes out PMI expansion in May
1 day ago
A third of Russians are ready to participate in a mass protest against falling living standards
1 day ago