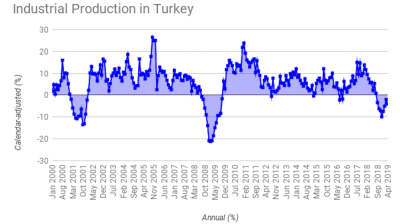 It posted a 4% y/y decline in the fourth month after registering a revised 2% y/y contraction in March, the lowest of the decreases registered across the eight-month-long uninterrupted period of contraction seen since September.

Prior to the industrial data release, a Reuters poll predicted a 2.5% y/y fall in the calendar-adjusted industrial output index for April.

Analysts are weighing up whether Turkey can avoid a double-dip recession. The economy contracted 2.6% in the first quarter after a 3% drop in the last quarter of 2018. Economic activity has remained slow since, with the central bank's policy rate having not budged from 24% since September.

PMI records another fall
The latest manufacturing purchasing managers’ index (PMI) survey from the Istanbul Chamber of Industry and IHS Markit shows the index falling to 45.3 in May from 46.8 in April (50.0 is the threshold between contractions and expansions). “Anecdotal evidence from survey respondents indicated that the depreciation in the Turkish lira affected the manufacturing sector during the month,” IHS said.

However, it should be noted that the government has lately launched fresh stimulus packages ahead of the Istanbul revote to be held on June 23.

The seasonally and calendar-adjusted industrial production index fell back to negative territory in April after posting consecutive growth readings for a three-month period. It was down 1% m/m in April.

The economic contraction triggered by the currency crisis that hit Turkey’s debt-fuelled economy last summer has hit consumer demand hard. For instance, lower demand drove the country’s auto production down by 12% in January to May.

On June 14, Moody’s Investors Service cut Turkey’s sovereign rating deeper into junk, saying the downgrade reflected its view that the risk of another Turkish balance of payments crisis, following on from the turmoil seen last summer, continued to rise, and with it the risk of a government default.

Turkey is structurally highly reliant on external capital flows, and Moody's confidence in its ability to continue to attract the large sums needed each year to repay debt and sustain growth is waning.

Amid the economic turmoil, many sound companies with good prospects on Turkey’s relatively young and big population of around 81mn people are struggling with debt repayments, meaning foreign investors looking to do some cheap M&A business are increasingly circling some prime targets.

Capital Economics pencils in second-quarter contraction of around 15% q/q on pandemic impacts.

No cause to party in Turkey with Q1 growth of 4.5% y/y overshadowed by “ominous” outlook for Q2
12 hours ago
Trust in Russian President Vladimir Putin sinks to 25%, approval of his actions down to 63%
1 day ago
Real wages in Ukraine dropped 0.4% y/y in April, after growing 9.3% y/y in March
2 days ago
New coronavirus cases decline across emerging Europe but the epidemic’s not over yet
2 days ago
COVID-19 lockdown results in collapse of Lithuanian retail sales in April
4 days ago