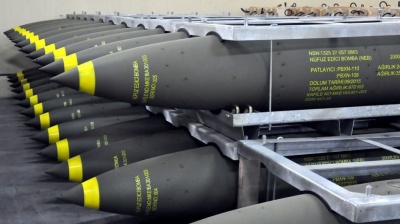 "Penetrating Bombs" produced by Turkey's Roketsan-Tubitak-SAGE, which was hired to manufacture precision-guided missiles for the F-35.
By bne IntelliNews July 18, 2019

Turkish defence companies may face temporary losses after the US decision to remove Ankara from the F-35 fighter jet programme amid the row over the deployment of Russian S-400 missiles, but their industry will emerge stronger as a result, the head of Turkey’s Defence Industry Directorate said on July 18.

At the risk of perhaps putting too brave a face on the state of affairs, Ismail Demir asserted: “Our companies may face losses initially, and even though issues like sanctions and more may lead to temporary losses for the defence industry, we think it will result in our defence industry becoming stronger.”

The Pentagon said Turkey was producing more than 900 parts for the F-35, a stealth fighter that is the world’s most advanced military jet.

Also according to the Pentagon, production of those parts will be shifted from Turkish to largely US factories. It estimated that this would cost Turkey some $9bn over the life of the programme.

Extra costs per jet
Demir said Turkish defence companies would evaluate how to compensate for their losses triggered by the programme removal but added that other countries involved in the F-35 programme would face extra costs of $7-8 million per jet as a result of the move.

The UK, meanwhile, was among European Nato member states that was set to rely on a Turkish F-35 maintenance depot, but that facility will now presumably lose its role in the fighter jet programme.

According to information on the official site of the F-35 programme, eight companies—namely Alp Aviation, Ayesas, Fokker Elmo, Havelsan, Kale Aerospace, Roketsan-Tubitak-SAGE and the Turkish Aerospace Industries (TAI)—have been signed up to support the development and production of F-35s.

Turkey has the second largest armed forces of Nato members. The Erdogan administration has set ambitious targets for achieving self-reliance in the manufacturing of military equipment.