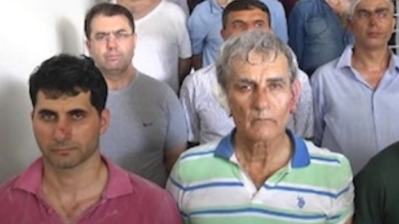 Former air force commander Akin Ozturk (r) and others were accused of directing the coup from an air base near Ankara.
By bne IntelIiNews November 26, 2020

A Turkish court on November 26 handed down hundreds of life and aggravated life sentences to most of almost 500 defendants, including army commanders and F-16 warplane pilots, accused of leading the July 2016 coup attempt against the Erdogan administration from an air base near Ankara.

The administration has purged Turkey’s air force to such an extent that it is struggling to find pilots to fly its F-16 fighter jets, defence analyst Michael Peck wrote in an article for the National Interest in mid-November. More than 300 F-16 pilots were dismissed following the failed putsch.

As many as 250 people were killed when rogue soldiers commandeered warplanes, helicopters and tanks and sought to take control of state institutions and overthrow the government of President Recep Tayyip Erdogan.

The latest trial is the highest profile of dozens of court cases that have been brought against thousands of people allegedly involved in the coup attempt, blamed by Ankara on supporters of US-based self-exiled 79-year-old Muslim preacher Fethullah Gulen. Gulen has always strenuously denied any involvement in the events.

Former air force commander Akin Ozturk and others at Akinci air base near Ankara were accused of directing the coup, bombing government buildings, including parliament, and attempting to kill Erdogan.

State-owned Anadolu news agency reported that four ringleaders, dubbed “civilian imams” over ties to Gulen’s network, were given 79 aggravated life sentences for charges of attempting to assassinate the president, murder, and seeking to overthrow the constitutional order.

The F-16 warplane pilots were among those given aggravated life sentences. It is the severest punishment that can be handed down by a Turkish court, meaning there is no possibility of parole, Reuters noted.

Turkey’s military chief at the time of the attempted coup, and now defence minister, Hulusi Akar, and other commanders, were held captive for several hours at the air base on the night of the coup.

A total of 475 people were on trial, 365 of them in custody. Seventy were acquitted, according to Anadolu.

Cleric Gulen, once an ally of Erdogan, was one of six defendants tried in absentia. Their dossiers were separated from the main trial, media reports said.

The government declared a state of emergency in Turkey after the failed coup. It then launched a large-scale crackdown, which critics claimed was used as a pretext to target a vast array of Erdogan opponents innocent of any crimes. The crackdown, which in the view of watchdogs has fundamentally breached basic human rights, is one reason why Turkey’s application for European Union membership has gone nowhere in the past few years.

Some 292,000 people have been detained over alleged links to Gulen. Nearly 100,000 of them have been jailed pending trial, Anadolu cited Interior Minister Suleyman Soylu as saying.

Around 150,000 civil servants were sacked or suspended after the coup, with 20,000 expelled from the military. Courts have handed down more than 2,500 life sentences, Reuters said.

Local conglomerate Turkerler and Italy’s Astaldi, the consortium building the Ankara Etlik City Hospital, has restructured an €833mn loan with a consortium of 15 banks, including the European ... more

The European Bank for Reconstruction and Development (EBRD) is providing a loan of up to $58mn to Turk Ekonomi Bankasi A.S. (TEB) in support of local small businesses facing liquidity ... more

Turkish flour maker Ulusoy Un gets EBRD, TSKB loan to help it keep up with high demand amid lockdowns

Turkish flour producer Ulusoy Un is to get a fresh financial shot in the arm to help it keep up with high demand from pasta-makers, bakeries and locked-down customers as ... more