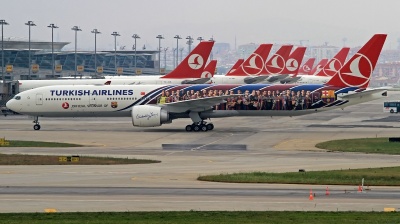 For Turkish Airlines in July the hoped for level of business never got off the ground.
By bne IntelliNews August 14, 2019

Turkish Airlines saw a decline of 4.8% y/y in the number of passengers it carried in July, registering a total volume of 7.12mn.

There was also an 11% y/y decline in domestic passenger numbers to 2.86mn. That is particularly striking because July is normally the high season for local tourism activity. The data thus suggest that locals were not travelling to the usual extent. Turkish consumers are perhaps not yet convinced that the economic outlook for Turkey will improve any time soon. Potential passengers may be setting aside money, bracing themselves for more turbulent times ahead by cutting down on non-essential expenditure such as holiday expenses.

In July, the flagship carrier served a total of 4.3mn international travellers. That figure was virtually unchanged from the same month of 2018. And it was also a surprising number given that the tourism ministry has said that the number of foreign tourists visiting Turkey surged 18% y/y to 4.5mn people in June, a month for which Turkish Airlines reported a 3.2% y/y increase in overall passenger traffic. In June, the airline saw a 4.6% y/y increase in international passengers while the rise in domestic passengers was a more limited 1.3% y/y.

Turkish Airlines did not offer any explanation as to why its performance was so poor in July.

In January-July, the carrier served a total of 42.3mn passengers, marking a 2.2% y/y decline.

Since July of last year, Turkish Airlines has added 16 more planes to its fleet. It now has a total of 341 jets. The carrier was flying to 313 destinations as of July, up from 304 destinations a year earlier.

Sheer pressure
The sheer economic pressure the Turkish consumer is presently under was highlighted in early August when latest figures showed the country’s auto market collapsed in July. Vehicle sales plunged 66% on an annual basis to 17,927 units, according to data from the Auto Distributors’ Association (ODD).

The figure was the third sharpest decline within the past year, following the 77% y/y contraction in October and the 68% y/y fall the month before that. Highly significant was the fact that tax cuts the government granted in a bid to revive sales of vehicles expired at the end of June. Automakers appeared to have become hooked on the tax generosity as a means of achieving anything like respectable sales figures in an economy struck by a biting recession.

In the seventh month, 15,000 passenger cars were sold, which translated into a 63% drop from a year ago, while the light commercial vehicle (LCV) market—which provides some important clues on economic activity—shrank 76% y/y to just 2,500 units.

The latest consumer sentiment survey, meanwhile, showed not a glimmer of hope for the local car market or other consumer markets. The headline consumer confidence index declined by 2% in July from June. The sub-index measuring consumers’ assessments of the general economic outlook for the next 12 months fell a steeper 0.8% m/m. It had risen 5.4% y/y in June.