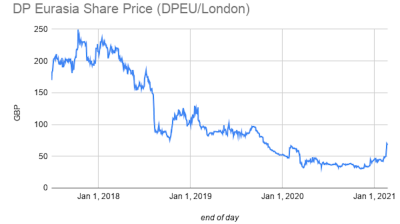 Turkish private equity fund Turkven has sold its 32.81% stake in DP Eurasia (DPEU/London) to Jubilant Foodworks, the largest food service company in India, for GBP24.8mn, DP said on February 19 in a filing with the London Stock Exchange. DP, launched in 1996 in Turkey, operates Domino's Pizza brand in Turkey, Russia, Azerbaijan and Georgia.

The deal valued the company at GBP76mn while its market capitalisation stood at around GBP102mn as of February 22.

In June 2019, Turkven said that it was considering options, including the sale of a stake of up to 29.9% in DP Eurasia.

It is the largest pizza delivery company in Turkey and the third largest in Russia. It had 771 stores (550 in Turkey, 190 in Russia, nine in Azerbaijan and four in Georgia) at end-2020.

Some 29% of its stores are owned by the company and the remaining 71% are franchise stores.

In December, Turkven sold its 60% stake in Turkish pumps manufacturer Vansan to Japan’s Ebara. Ebara also bought the remaining 40%. It paid $108mn for the full stake.

Amazon is expanding operations in Turkey amid the COVID-19 outbreak that has driven up online sales.  The company, which arrived in the country three years ago, has commissioned local firm ... more

A parliamentary commission has reportedly approved a bill filed by Turkey's ruling Justice and Development Party (AKP) on hiking the country's 2021 corporate tax rate to 25%. The rate, which ... more