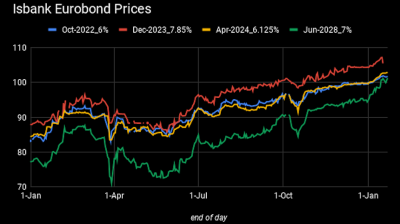 Turkey’s largest private lender by assets, Isbank, on January 16 sold $750mn worth of subordinated bonds due January 2030 at a coupon rate of 7.75%, according to a stock exchange filing by the lender.

Basel III-compliant papers are callable at the end of the fifth year.

So far in 2020, three Turkish lenders have sold a combined $1.15bn worth of eurobonds.

Isbank’s sales followed a $750mn placement by a subsidiary, the Industrial Development Bank of Turkey (TSKB).

Market players are awaiting a eurobond sale by the Turkish Treasury. The Treasury usually holds one in the first month of the new year.

In a January 16 article entitled “Slam dunk week for CEEMEA bonds as NIPs barely on show”, Global Capital said: “It has been an extraordinary week in the CEEMEA new issue market where barely any deal was printed without a huge order book and a flat or negative new issue premium. Though a slew of expected sovereigns have so far stayed away, bankers said they expected them to step up to the plate soon.”

This week, Saudi Arabia and Romania have benefited from the ‘dollar rains’. Ukraine is also in the market.

Turkey’s 5-year credit default swaps (CDS) fell below 250bp on January 15 and have remained in the 240s since then. A record level of 566bp was seen in September 2018 after the lira crisis.

The next scheduled eurobond redemption by a Turkish issuer is scheduled for this week—on January 24, 2020 private lender Akbank will repay $500mn (XS1111101314).