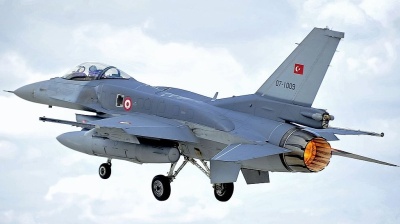 When Turkish F-16s or other air assets enter Syrian or Iraqi airspace, the US is fully aware of it, according to University of Kurdistan professor Arzu Yilmaz. / SAC Helen Farrer RAF Mobile News Team, OGL v1.0
By Akin Nazli in Belgrade December 3, 2022

Turkey in no way can carry out air strikes in northern Iraq and Syria without the knowledge of Russia and the US, Arzu Yilmaz, a professor at the University of Kurdistan Hewler in northern Iraq, has told bianet.

“Not even birds can fly in the airspace of Iraq without the knowledge of the US. It's as clear as that,” she was cited as saying.

Iraq’s airspace as a whole is controlled by the US. And since Russia intervened in Syria in 2015, the US, to a large extent, has controlled Syrian airspace in coordination with Russia.

In Syria, Russia maintains control of the airspace over the western Euphrates River region, while the US looks after the airspace east of the river.

Russia and the US thus provide indirect support to Turkey’s military operations in Syria as Moscow remains silent and Washington expresses “concern”, according to Yilmaz.

It is anticipated, meanwhile, that Tehran will carry out a land operation in the Kurdistan region of Iraq since it wants to marginalise the ongoing anti-regime protests in Iran as an ethnic Kurdish problem, Yilmaz also said.

On November 13, a bomb attack in Istiklal Avenue, the main pedestrian shopping zone in Istanbul, killed six people and wounded 81. Turkey’s government is yet to come up with a logical explanation for the bomb attack. So far, no one has claimed responsibility and everyone is pointing the finger at an enemy.

Turkey is once more a land beset by violence following the bomb attack. The Turks are afraid of a repeat of the period of terror and violence that began with the June 2015 elections and ended with the introduction of the currently prevailing “Turkish-model presidential system” in 2017 amid a state of emergency.

Turkey’s government has blamed the Istiklal Avenue attack on the outlawed Kurdistan Workers’ Party (PKK). Also, on November 20, it launched an air bombardment campaign targeting Kurdish groups in northern Syria and Iraq. It should be noted that this did not amount to military offensive on the ground – Turkey watchers mainly see it as conducted for the Erdogan regime’s public relations purposes.

With the airspace in the region controlled by the US and Russia, Turkey is permitted to use ground forces only in limited areas. But the US-Russia duo occasionally open the airspace.

Also on November 20, a rocket hit Turkish police and military forces stationed at the Oncupinar border gate in Kilis province on the Turkey-Syria border. Kurdish organisations were yet to claim responsibility.

On November 21, about a dozen rockets hit Karkamis town in Turkey’s Gaziantep province on the Syria border. Two civilians died, 19 were wounded. Kurdish organisations were yet to claim responsibility.

The situation in Turkey calmed in recent days, while the clashes from operations in northern Iraq, relaunched in April, continued. The risk of a further escalation is clear, with Turkey’s government still seeking permission from Russia and the US for a Syria ground operation.

When it comes to the Istanbul bombing, a woman, who is said to have accepted that she left the backpack that allegedly carried the bomb on a bench, remains under arrest. In her testimony, she reportedly said that she was not aware of the bomb and believed that the backpack contained drugs.

She also allegedly stated in her testimony given in the police station and at the courthouse that she was in contact with PKK-affiliated organisations in northern Syria. The woman is not a Kurd and there are no Kurds among the dozens of suspects who were allegedly operating around her and who are under arrest or detention.

Turkish government proxies suggest that the PKK established a proxy organisation of Arabs and that the Istanbul bombing resulted from the first operation of this group.

It should be noted that there is no consensus from the various actors of the Turkish state when it comes to the PKK story. Some parts of the state mechanism have criticised the government’s attempts to politicise the case using retired officials as mouthpieces.

The PKK, on the other hand, has rejected the claim that it perpetrated the attack. The problem is that it has in the past rejected responsibility for terror attacks that targeted civilians, only for, later on, some so-called PKK offshoots such as TAK to claim responsibility.

PKK proxies have been stating that Turkey’s interior minister Suleyman Soylu is the actual perpetrator of the attack.

The Gulenists, on the other hand, have been circulating the claim that President Recep Tayyip Erdogan ordered his intelligence chief Hakan Fidan to conduct the attack. Also, in response to the accusations levelled by Soylu and Erdogan’s junior coalition partner, the Nationalist Movement Party (MHP), some US proxies have blamed the MHP for the attack.

If there is someone you don’t like, you are invited to blame them for the attack.

The whole scenario is plastered with speculation and manipulation. All the mentioned political structures, ranging from ‘imperial’ powers to the cheapest proxies, are anyway, by nature of their being political actors, implicated, to one extent or another, in atrocities, historical and current.

At the cost of contributing to the ocean of mis-, dis- and mal-information, it could be noted that the woman detained as the alleged bomber and the people supposedly operating around her have arrived in Turkey from regions in northern Syria that are currently held by Turkey-backed jihadist groups.

There are many such groups in the region in question. They fight among each other. Some of them have a problem with Turkey’s government from time to time. They are professional and they work for different employers in different intervals. They also do piecework. If you do not like someone and have enough money, you can find a jihadist group in the region in question that would bomb the subject of your displeasure wherever they are around the globe. If the subject is in Turkey, the price will be relatively low as Turkey is their backyard.

The real question at the moment is whether the Istanbul bombing will remain an isolated case or mark the start of a new reign of terror and violence.

The obvious but possibly erroneous thing to do is to tie everything to Turkey’s upcoming national elections, but the inescapable fact is that the polls are due by June 2023. Nothing would be a surprise in the period leading up to the pivotal election day.