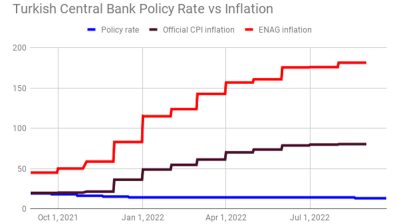 Turkey’s official consumer price index (CPI) inflation amounted to 80.21% y/y in August, following on from the 79.6% announced for July, the Turkish Statistical Institute (TUIK, or TurkStat) said on September 5 (chart).

August’s CPI figure is the highest headline inflation figure recorded by Turkey since the 80.4% posted in September 1998.

At 80.21%, Turkey stays in sixth place in the global inflation league. Turkey has so far led the global inflationary period. Now, it looks set to lead the stagflation/slumpflation period. The official growth figures will not be affected by the ongoing tragedy in the real economy.

The July figure was the highest posted since the 149.8% y/y reported for February 1995.

On July 28, the central bank increased its end-2022 annual inflation forecast to 60% from the 43% it predicted three months ago. On September 22, at its next monetary policy committee (MPC) meeting, the central bank is expected to cut its policy rate by 100bp to 12%.

Since August 19, the USD/TRY has been testing the 18.20-level. Turkey’s five-year credit default swaps (CDS) have, meanwhile, risen above the 700-level, while the yield on the Turkish government’s 10-year eurobonds remains above the 10% level.

On September 21, the Fed’s open market committee is currently expected to deliver another 50bp rate hike.