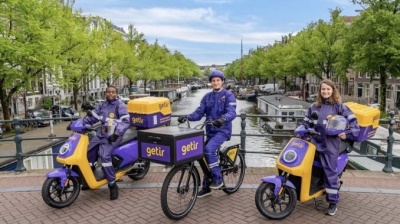 Getir arrived in Amsterdam in late May.
By Akin Nazli in Belgrade June 6, 2021

Turkish online rapid groceries delivery company Getir has raised $555mn in a funding round that valued the company at over $7.5bn, Reuters reported on June 4.

The company is reportedly planning to come online in Berlin and Paris in June, and in several cities in the US in Q4.

In March, Getir raised $300mn of funding in a financing round, making the enterprise Turkey’s second tech unicorn thanks to its updated valuation at that point of $2.6bn.

In May, Getir went online in Amsterdam. In January, Getir launched operations in London. It plans to go online in Sao Paolo in H2 2021.

Getir, launched in 2015, is also aiming to set up operations in Mexico City.

In April, the Turkish competition board launched a probe looking at 32 companies, including Getir, in relation to the signing of a “gentlemen’s agreement” to prevent workers from moving between companies.

Georgia may be most homophobic country in Europe data suggests

E-commerce platforms in Russia will have to disclose their ranging algorithms and guarantee participants a possibility to control prices, according to proposals currently considered by the federal anti-monopoly service.

The acquisition is aimed at expanding MTS Group’s portfolio of digital financial services for B2B clients.

Wildberries' assets to be blocked in Ukraine and it will be prevented from moving goods through the country.