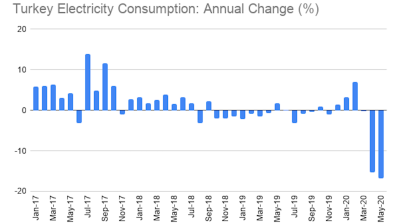 Electricity consumption in Turkey collapsed by 17% y/y to 19.6bn kWh in coronavirus-troubled May after plunging 15% y/y to 19.1bn kWh in April, the lowest level recorded since 2013, BloombergHT reported on June 2.

Turkey’s industrial production and GDP data, produced by the country’s statistical institute TUIK, are unfortunately far from reliable, while the Purchasing Managers’ Index (PMI) data compiled by IHS Markit under the sponsorship of the Istanbul Chamber of Commerce should be taken with a generous pinch of salt such are the difficulties of pinning down verifiable information in the Middle East’s largest economy, elusive at the best of times.

This being the case, electricity consumption is seen as a more reliable indicator when it comes to getting some idea as regards the real level of industrial activity in the country.

Electricity production was also substantially down in May, declining by 18% y/y to 19.6bn kWh. Some 46% of the production derived from hydropower plants while output from domestic coal took a 15% share and imported coal made a contribution of 17%.

Both natural gas plants and wind plants produced 8% of total electricity output in the month while the remaining 6% was sourced from geothermal, solar, fuel-oil and biomass power producers.

Turkey’s natural gas plants, which at 25,654MW had the highest share in the country’s overall electricity production capacity of 91,565MW in April, have hit trouble due to their long-term gas supply contracts and the recent fall in electricity prices.

A price hike for household electricity consumers is expected in the upcoming months, despite the historically low oil prices on global markets. It will stem from currency fluctuation and the structural design of the Turkish electricity market, energy expert and price comparison website encazip.com founder Cagada Kirim told Hurriyet Daily News on May 12.

Under a scheme introduced in 2011, Turkish renewable energy plants such as wind, hydropower, geothermal, biomass and solar installations are provided with feed-in tariffs (YEKDEM). The support for wind and hydropower plants is fixed at $0.073 per kilowatt-hour (kWh), for geothermal facilities at $0.105 kWh and for solar and biomass plants at $0.133 kWh.

Turkish industrialists have complained about the huge jumps seen in the country’s electricity prices.

In April, Cem Asik, head of Turkey’s Electricity Producers Association, anticipated a 17% decline in electricity consumption in May and a 4% contraction in June.