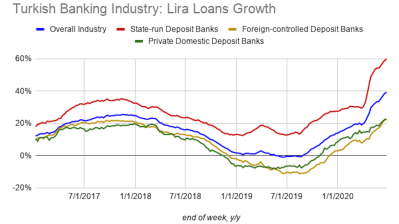 Credit card and debit card payments in Turkey slightly declined to a value of TRY20.1bn ($2.9bn) in the country’s fourth ‘post-lockdown’ week (ending June 26) from TRY21.2bn a week ago, according to latest data from the Central Bank of the Republic of Turkey (CBRT).

Turkey officially confirmed its first coronavirus (COVID-19) case on March 11 and TRY21.3bn was recorded in the week ending March 13 when COVID-19-driven stockpiling occurred.

However, initial measures to curb the virus outbreak only arrived with a two-week lag.

As a result, the first impact of the health and economic emergency on card payments — a sign of real consumption in the country — was felt in the week ending March 27 when the total value of such transactions fell sharply to TRY13.5bn.

The lowest volume was registered in the week ending April 24 at TRY13bn.

Turkey reopened restaurants and beaches and ended travel restrictions on June 1 after reopening shopping malls on May 11.

In April, the government launched a campaign to delay repayments on credit card and other bank debts for a three-month period. Private lenders have joined the state lenders in conforming with this.

Finance Minister Berat Albayrak stated on April 12 that state lenders had postponed TRY60bn worth of loan and credit card debt repayments, while he called on private banks to also offer delays. Eventually, they did.

In April, 38,000 Turks used a credit card for the first time. There were 71mn credit cards and 168mn bank cards in the country of 83mn people as of end-March, according to latest data from the Interbank Card Center (BKM).

In the recorded second quarter to date (from April 1 to June 26), card payments totalled TRY217bn, the lowest figure since Q1 2019. The remaining four days are awaited for ascertaining the overall Q2 2020 figure.

Foreigners’ card expenditures in Turkey amounted to TRY21bn in Q1, according to data by the Interbank Card Centre (BKM). The figure stood at TRY119bn in 2019.

Higher card transaction volumes could also be a sign of inflation.

As of June 26, the credit card debt stock of consumers rose to TRY113bn from TRY110bn in the previous week, according to separate data from banking watchdog BDDK. The figure stood at TRY103bn as of May 15.

The volume of consumer loans extended by Turkish banks also moved up to stand at TRY578bn in the week ending June 26 from TRY565bn a week earlier. The figure stood at TRY465bn at end-2019.

In June, vehicle sales in Turkey jumped, as expected, by 66% y/y to 70,973 units, highest level since December, after contracting 15% y/y and 2% y/y in April and May, respectively, according to data from the Automotive Distributers Association (ODD).

Significant jumps in home and white goods sales are also expected in the month thanks to the latest cheap consumer credit campaigns that were launched at the beginning of June.

BDDK also reported that the total Turkish lira loan volume climbed to TRY2.1 trillion as of June 26 from TRY2.07 trillion from the previous week. At the end of 2019, total lira loans volume was TRY1.68 trillion.

ISTANBUL BLOG: Now you see it, now you don’t

After the initial lockdown, sales of non-food goods defied the crisis and advanced steadily, posting a 10.8% y/y annual advance in Q1.

Headline CPI jumped to 4.3% year on year in April. The idea that the National Bank of Poland can mimic the accommodative stance of the Fed or ECB is increasingly debatable. In terms of inflation, Poland is closer to the emerging markets.

Russians Services PMI remains a strong 55.2 in April but slowed a little from March, optimism for the rest of the year high

The seasonally adjusted IHS Markit Russia Services Business Activity PMI index slowed a little in April to 55.2, down slightly from 55.8 in March, but remains robustly above the 50 no-change level as services bounce back.

Romania’s retail sales up 4.1% y/y in Q1
1 day ago
ING: Inflation pressure continues to build in Poland
1 day ago
Russians Services PMI remains a strong 55.2 in April but slowed a little from March, optimism for the rest of the year high
2 days ago
Bucharest Stock Exchange up 15.7% ytd despite modest performance in April
3 days ago
DATACRUNCH: Ukraine starts to close the gap with Russia
3 days ago