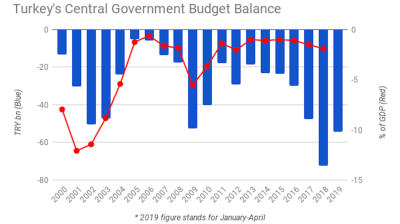 Turkey’s central government budget deficit jumped to TRY18.3bn in April from TRY2.75bn a year ago, the ministry of treasury and finance announced on May 15.

Consequently, the cumulative deficit across the first four months of 2019 grew by 135% y/y to TRY54.4bn.

Analysts typically commend Turkey's state budget metrics as one of the country's economic plus-points. But they are losing their sheen amid the nation's economic turmoil.

In January-April, total expenditures rose by 29% y/y to TRY330bn while revenues rose by a relatively limited 19% y/y to TRY276bn with tax revenues increasing only 6% y/y to TRYTRY203bn.

Also across the first four months of the year, direct taxes (income + corporate + wealth) rose by 21% y/y to TRY79.3bn but VAT revenues declined by 17% y/y to TRY17.4bn and special consumption tax (SCT) collection contracted by 8% y/y to TRY41bn.

“On a 12-month trailing basis, the budget deficit has reached TRY103.9bn (~2.6% of GDP), while the primary balance also points to a TRY16.9bn deficit. According to the IMF definition, i.e. adjusted for one-off items, the primary deficit jumps to a whopping ~TRY100bn,” Serkan Gonencler of Seker Invest said in a research note entitled “Deterioration in fiscal deficit getting more pronounced”.

Tacirler Invest said it saw an upside risk to its budget deficit to GDP estimate at 2.3%. Ozlem Bayraktar Goksen of the Istanbul-based brokerage made the observation in a research note entitled “Annual budget deficit has reached 2.7% of GDP”.

Turkey sees unexpected rise in inflation as lira weakness pushes up prices
10 hours ago
Russia's services PMI bounces back to 35.9 in May from a record low of 12.9% in April, but business still contracting
15 hours ago
Easing of lockdowns offers hope to emerging Europe’s COVID-struck economies
1 day ago
Kazakh manufacturing ekes out PMI expansion in May
1 day ago
A third of Russians are ready to participate in a mass protest against falling living standards
1 day ago