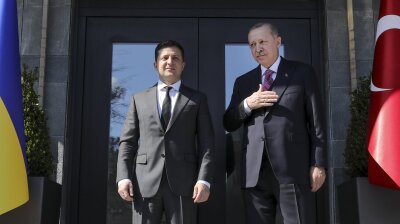 Ukraine’s trade volume with Turkey can double to $10bn per year if the details on a long-awaited free trade deal are straightened out after years of negotiations, according to Burak Pehlivan, the chairman of the Turkish-Ukrainian Business Association. An uncertain path to EU membership has had the unintended effect of a burgeoning partnership between Ankara and Kyiv.

Turkey is currently Ukraine’s fifth-largest trade partner, although business links between the two countries grow every year. 2021 is not over yet, but it has already seen a trade volume of $5bn. This volume exceeds the total for the last pre-pandemic year of 2019. President Volodymyr Zelenskiy wants it to hit $6bn. In 2020, Turkish companies invested $400mn into Ukraine, making Turkey the largest investor that year. Pehlivan also pointed out that Ukraine’s trade with Turkey has not recovered to its 2008 peak of $8bn but insisted that a comprehensive free trade deal will push trade far above the current level.

Ukraine is one of only five countries in the world that have reciprocal passport-free travel arrangements with Turkey. According to Pehlivan, this is Turkey’s “mini-Schengen zone.” Turkey, alongside Egypt, accounted for a staggering 70% of Ukrainian outbound tourism in the first half of 2021. In June Turkey declared it wanted $1.5mn Ukrainian tourists in 2021. Turkey was the most popular destination for Ukrainian tourists in 2020, according to a report by the Mediterranean Tourist Hoteliers Association, with 564,000 out of 750,000 outbound tourists choosing to visit Turkey. The Ukrainian market share of tourists visiting Turkey has increased from 2% 10 years ago to 4% today.

In 2021 Turkey sold 12 Bayraktar TB2 military drones to Ukraine. The Bayraktar drone was first used in the Donbas conflict on October 27, prompting criticism from Moscow and Berlin. Ukraine has plans to begin domestically producing Bayraktar drones domestically, following the signing of a memorandum of co-operation by Ukraine’s defence ministry and Baykar Savunma, the Turkish defence company that designs and produces Bayraktar drones, on September 29. Ukrainian engine manufacturer Motor Sich also signed a co-operation agreement on September 24.

Ukraine consistently runs a large trade surplus with Turkey. According to Pehlivan, since independence, Ukraine has exported $40bn more to Turkey than it imported. This means that Turkish businesses are reluctant to give Ukrainian goods unfettered market access.

Ukraine has a poor negotiating position because it joined the World Trade Organization in 2008 on unfavourable terms. On average, tariffs permitted by the WTO’s conditions for Ukraine are much lower than those for Turkey, meaning Ukraine can offer fewer concessions.

Agriculture is a sensitive negotiation topic. It represented nearly 45% of Ukraine’s exports to Turkey in 2019. Soybeans and corn alone made up over 70% of agricultural exports.

Traditionally, Ukraine’s largest exports to Turkey have been iron and steel. Some Turkish steel producers are uneasy about giving their Ukrainian competitors even more access to their market.

Pehlivan thinks that Turkish businesses could build their own production lines in Ukraine, such as food processing, textiles and car manufacturing.

Bolstering transport links is key. There are many small seaports on the Black Sea coast which are inefficient and could provide many more opportunities for cargo transit if they were better run. However, Ukraine’s State Property Fund intends to privatise most of the country’s small ports.

For the first time in Ukraine’s history, three state-owned ports will be put up for auction in 2021: UstDunaysk, Bilhorod-Dnistrovsky and Skadovsk. If these sales are successful, nine of the other ten ports will also be privatised.

Turkey has potential as a transit country for Ukrainian goods to enter Asian markets. The Kars-Tbilisi-Baku railway completed in 2017 gives Ukrainian stocks direct access to Central Asia and China. Before 2017, Ukraine’s only rail connection to China was through Russia, which placed heavy restrictions on Ukrainian freight. “Now, the government of Azerbaijan is investing heavily to connect ports in the Caspian Sea to facilitate more trade,” said Pehlivan.

The business association head also stressed the importance of Ukraine’s recent attempts to increase trade with Asia, stating that Asian investors were more interested in Ukraine than Western ones. China has been Ukraine’s largest single nation trading partner for two years in a row. With EU membership for both countries as far away as ever, both Ankara and Kyiv have looked past the West and began exploring opportunities closer to home and further east.

Emerging Europe M&A soars by 55% to €94bn in 2021
20 hours ago
Lithuania looks for quality, not quantity in fintech
1 day ago
Who needs a war?
2 days ago
Outbreak of calm grips Ukraine
2 days ago
Primark to launch in Romania as it pursues CEE expansion
2 days ago