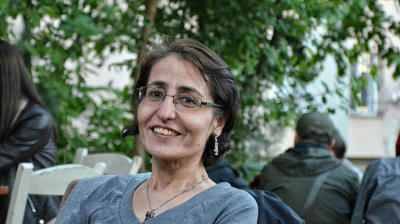 Semiha Sahin, an editor at ETHA, is in legal limbo after Turkish authorities failed to fully implement the terms of her house arrest.
By bne IntelliNews December 11, 2019

Turkey has lost one claim to infamy. It no longer holds the top spot for the imprisonment of journalists.

China has taken the number one place after imprisoning at least 48 journalists in 2019 to date, according to an annual ranking published by the Committee to Protect Journalists (CPJ) on December 11. Turkey, however, does not get to claim plaudits for a big improvement. It took second spot having jailed 47 journalists, the watchdog said.

The New York-based CPJ said in a commentary on the ranking: “This year’s census marks the first time in four years that Turkey has not been the world’s worst jailer, but the reduced number of prisoners does not signal an improved situation for the Turkish media. Rather, the fall to 47 journalists in jail from 68 last year reflects the successful efforts by the government of President Recep Tayyip Erdogan to stamp out independent reporting and criticism by closing down more than 100 news outlets and lodging terror-related charges against many of their staff.

“With the industry gutted by government shutdowns and takeovers, and scores of journalists in exile, jobless, or cowed into self-censorship, authorities on October 24 enacted a legislative package that granted new appeals on convictions for certain offenses—including ‘propaganda for a terrorist organization,’ a favorite charge of prosecutors—and shortened some pretrial detention periods.”

Dozens of journalists not currently jailed in Turkey are still facing trial or appeal and could yet be sentenced to prison, while others have been sentenced in absentia and face arrest if they return to the country, CPJ added.

“So many people in Turkey—tens of thousands of military personnel, police, legislators, judges, and prosecutors as well as journalists, according to news reports—have been charged with crimes since a failed coup attempt in 2016 that what is left of law enforcement and the judiciary seem barely able to keep up,” the NGO observed.

The CPJ said one journalist, Semiha Sahin, had informed it of how she was released to house arrest pending trial but, because she was never fitted with an electronic monitoring device, she was effectively free but lives in fear of being caught and returned immediately to prison.

At least 250 journalists were imprisoned worldwide this year, according to the CPJ. The total last year was 255.

Other countries seen as among the most oppressive for journalists by the CPJ were Saudi Arabia and Egypt, which had both jailed 26 journalists in 2019 to date; Eritrea with 16 imprisoned; Vietnam, with 12; and Iran with 11.

The report with the ranking noted that “authoritarianism, instability, and protests” this year had led to an increase in the number of journalists imprisoned in the Middle East.

About 8% of those imprisoned globally are women, down from 13% last year, the report said. Politics, human rights and corruption were the subjects most likely to land journalists in jail, it added.