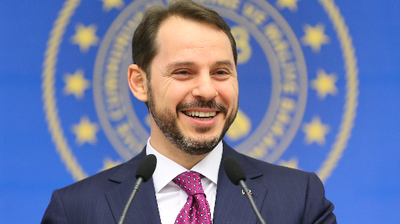 In wide-ranging comments this week, Albayrak criticised private banks for being "profit-oriented".
By bne IntelliNews January 22, 2020

First to those visits. Reuters on January 22 cited three bankers as saying that during late afternoon on January 17 banks’ computers were analysed as officials turned up following the opening of a wide-ranging probe of trading in the financial sector.

Turkey's Competition Authority has told media it is conducting "preliminary research" into banks, as it regularly does in all sectors—but local media have put out reports that the competition authority, which is part of the Ministry of Trade, is investigating possible violations in foreign-exchange, deposit, credit and brokerage services. Two Turkish broadcasters have said that more than 20 banks are involved.

Bankers say it is not exactly clear what the competition officials are investigating. One banker told Reuters that officials fanned out across Istanbul and simultaneously entered the lenders. They sat down at trading desks to analyse computers, and requested more transaction information that is due this week, the person said.

"The investigation that started on Friday [January 17] was a surprise to us," said a second banker, adding that the competition authority was not working with the BDDK banking regulator, which usually does such audits and would have access to some of the information being sought. "This is why it raises question marks since we don't exactly know what they are looking for," the person said. "All operations by banks are being investigated."

Finance Minister Albayrak was not perturbed by the investigation, telling local reporters: "There is nothing to be concerned about."

As already reported by bne IntelliNews, in a January 20 note to investors, Julian Rimmer at Investec was scathing in response to news of the investigation, saying: “The Turkish govt needs some cash so the Competition Board decided to investigate 20 banks, most of whom will be tapped for 1-2% of 2019 revenues by way of a fine. Most have provisions for this kind of bank robbery but it's symptomatic of the cash crunch experienced by the govt.”

A debate on whether Turkey can still claim to have “free” capital markets is under way, with the government having clamped down on financial markets with new rules and regulations in the wake of the 2018 currency crisis, which knocked nearly 30% off the value off the Turkish lira (TRY). The changes—including restrictions on foreign exchange and reserve requirements intended to stimulate lending—were meant to stabilise the lira and spark a recovery from the recession endured last year.

In 2013, the competition authority fined 12 banks a total of TRY1.1bm ($620mn at that time) for collusion on interest rates. In 2017, it investigated 13 banks over corporate loans.

Borrowing at below zero

As well as attempting to calm nerves over the latest probe, Albayrak has been busy trying to explain why the Erdogan administration is apparently not concerned that Turkey’s official borrowing costs have fallen below zero when adjusted for inflation.

Not long ago, the central bank—which has aggressively slashed its benchmark rate to 11.25% from the 24% that held sway only last July, taking it to just below the latest posted annual inflation rate—was advising investors that it would ensure that rates offered a “reasonable” real return. But Albayrak said earlier this week that it’s the nominal interest rate that “matters more”. He then suggested that the country’s currency should be at a more favourable level.

Turkey needs a “more competitive” lira, Bloomberg HT cited Albayrak as saying at a news conference in Istanbul on January 20. “The negative real rate is not new in Turkey. What matters more is the nominal rate,” he said.

Turkey’s currency has slipped into the 5.90s against the dollar since Albayrak’s remarks. Across 2018 and 2019, including the impact of the balance of payments crisis, it lost 36%.

It’s a “very dovish commentary from Albayrak” and “suggests lower rates and a more ‘competitive’ lira going forward,” Timothy Ash, a strategist at BlueBay Asset Management in London, said in response to the finance minister’s remarks on rates and the lira.

The government, however, is intent on a fast economic rebound to curry favour with voters unhappy at the economic turmoil. It has upped its target for growth to 5% for 2020-2022, after slashing last year’s forecast to near zero, and there is no way it will even come close to such an expansion of GDP if it does not ensure the economy is stimulated with bags of cheaper credit. A weaker lira will also, of course, make Turkey’s exports more competitive.

In his latest remarks to the media, Albayrak also criticised private banks’ profit-oriented approach, stating they should support the real sector like state banks and keep up with the changing environment. He claimed Turkey would not go back to its old habit of powering economic growth with bank loans, that there was no government plan for an early election and that the country’s financial security issue has become an issue of national security.

There was a delayed demand for consumer loans, Albayrak also stated, saying: “It’s time for some fine-tuning”

JPMorgan Chase & Co, meanwhile, has said it expects Turkey’s policy rate to fall below 10% as early as July and reach 9% at the end of 2020. “If growth disappoints and/or geopolitical risks subside in a sustained way, the central bank could deliver more,” JPMorgan analysts including Yarkin Cebeci said in a report.

“Conversely, and perhaps more probably, a sharp worsening in external balances that could follow a powerful recovery in domestic demand and increased geopolitical vulnerabilities could start pressuring the lira and hence prompt Turkey’s central bank to be more cautious,” they said.

Bloomberg noted that a lack of an interest rate buffer against market sell-offs could now present a threat for Turkey.

Moody’s Investors Service has said negative real interest rates also expose Turkish banks to occasional “risk-off” episodes, with the premium no longer compensating for the multiple risks of investing in Turkey and its banks,.

“The negative rate makes lending to banks and investing in Turkish lira less attractive than in other emerging markets with positive real interest rates and will likely negatively affect central bank credibility,” Moody’s said in its Credit Outlook report released on January 20.