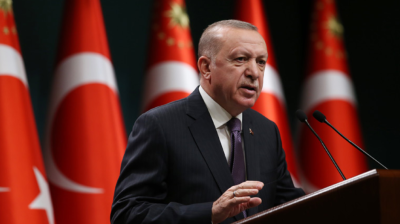 Erdogan announces after a cabinet meeting that Turkey will go into a "full lockdown". / Turkish presidency.
By bne IntelIiNews April 27, 2021

Turkey is to introduce a nationwide "full lockdown" starting on April 29 and lasting until May 17 to curb its dramatic surge in coronavirus infections and deaths.

The country presently has the world's fourth highest number of cases and the worst on a per-capita basis among major nations. Officials are worried that if they don’t act now, the country’s international tourism industry could for the second year running suffer devastating losses. Tourism accounts for around 11% of the Turkish economy. It earned Turkey a record $34bn in 2019, but last year the impact of the pandemic caused that figure to plummet by around $22bn.

Turks will have to stay indoors except for essential shopping trips and urgent medical treatment under the lockdown, announced by President Recep Tayyip Erdogan late on April 26. Certain groups including emergency service workers and employees in the food and manufacturing sectors will be exempt.

"At a time when Europe is entering a phase of reopening, we need to rapidly cut our [daily] case numbers to below 5,000 not to be left behind. Otherwise we will inevitably face heavy costs in every area, from tourism to trade and education," Erdogan said.

The measures will be implemented "in the strictest manner to ensure they yield the results we seek", he said.

Two weeks ago Turkey announced a night-time curfew from 7 pm till 5 am on weekdays, as well as full weekend lockdowns. But these measures have not brought the coronavirus outbreak in the country under control.

Nevertheless, Turkey’s official daily new coronavirus case count, which last week was still exceeding the 60,000 threshold, was by April 26 down to 37,312. That will invite more scepticism from many observers including health professionals in the country who do not trust the health ministry data. Last year, amid growing claims that its data was not realistic, the ministry conceded that it had not been including asymptomatic cases even though a person infected with coronavirus who is not showing any symptoms can still pass the infection on to others.

The lockdowns used by Turkey last year to counter the virus outbreak came under fire for being too relaxed.

The head of the Turkish Medics Association, Sebnem Korucu Fincanci, in early April decried Turkey’s March easing of restrictions that triggered the latest surge in the virus as the biggest misstep in the Erdogan administration’s handling of the outbreak. The gains made over the winter were sacrificed, she said, describing the result as "social murder" in an interview with Reuters published on April 12. "We called this a 'social murder' because they already know what will cause these deaths, they do not have any preventative measures," she added, saying that intercity travel, manufacturing and public transportation should all be halted.

Russia’s CBR slashes key rate to 11% ahead of schedule