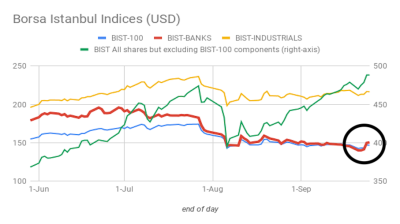 From the beginning of last week (the trading week from September 21 to September 25), there was talk of “foreigner interest in banks” after some upward movement in banking stocks was seen. The “foreigners” in question should have been aware that the Turkish government was getting ready to stage a ‘no-hike rate hike’ theatre on September 24.

Following the announcement of the hike that really wasn’t, the banking index closed 5% up day on day. Moreover, during the morning of September 25, the banking index moved up a further 3% d/d. Unfortunately, the index then closed the day with a rather limited rise but it was still up 5% w/w at the end of the trading week.

As things then turned out, the “foreigners” in question, in other words the investors who were supposed to have pushed up the banking share prices, were not visible in the data on foreign investors' stakes.

Foreign investors' share in banks' free-floats from January 2019 to September 18 this year (by Ak Invest).

The Turkish government sees life as simple. It believes that governing a country, or an economy, is only about governing perceptions.

This perspective is supported by another bold assumption, namely that everyone is a fool and ready to be steered in a convenient direction.

Such a way of seeing life makes the government unable to see that some people simply play the fool as long as they gain some benefits from doing so.

The government is unfortunately still not aware that even pure ignorant (as it sees them) Turks (whom it thinks it can fool by saying, “What is your business with the dollar?”) abandoned its candidates in the last meaningful elections—the local polls held in spring last year—after it was unable to bribe them in cash terms.

It’s the same story with the Erdogan administration’s foreign investor “allies”. The “allies” in question are when it suits them ready to publicly support any manipulative campaigns staged by the government, but so far this year they have pulled out around $14bn from Turkey, while the government found itself selling cheap dollars to them while supporting bond and stock prices.

Following on from the Black Sea natural gas discovery stage performance (sceptics eagerly await the day when they find out how much gettable gas there really is), the current story suggests that the government has broken through all negative expectations on Turkey with a surprise rate “hike”. If you buy.

During the coronavirus (COVID-19) lockdown period, one story in circulation was that there were “individual investors’ who were interested in the Borsa Istanbul”. It sounded fishy and indeed no-one could come up with a tangible explanation.

So, the best choice was to avoid the Borsa Istanbul as foreign investors, as could be seen in balance of payments-related data, were heavily selling.

By now, even the stakeholders in the Borsa Istanbul are referring to the supposed individual investor accounts as “fake”.

Of course, as the Bard had it, "All the world’s a stage, And all the men and women merely players" (has it ever been more true?), but if we want to try and find at least some sure footing what we can do is to check the scoreboards, though the scores come in lagged and we have to eliminate manipulated data.

Has the Turkish government given up yet keeping the foreign investors' share at above 50% with a range of ruses? The 1,000-level for the Turkish lira-denominated BIST-100 is still holding.

According to the latest available data released on September 24 by the central bank, non-resident investors bought a net $3mn of Borsa Istanbul equities in the week ending September 18 versus a net $30mn outflow in the prevous week.

Though a tiny gain, it was marked down as the first time since mid-June that the Borsa Istanbul had seen a net inflow.

But there was a surprise in stock-basis data as in the week ending September 18, the foreign investors’ share in the free-float of Turkcell (TCELL) jumped after nosediving the previous week (chart below from Is Invest online analysis tool).

Shares in Turkcell sold by Sweden’s Telia Sonera were circulating to the remaining shareholders, the Turkish Wealth Fund (TVF) and Russia’s Alfa Telecom, based on a share sale agreement signed in June.

Foreigners also bought the Sisecam group companies (SISE, TRKCM, SODA, ANACM) that will merge under Sisecam (SISE) as of September 30. As of September 30, Soda (SODA), Anadolu Cam (ANACM), Trakya Cam (TRKCM) and Denizli Cam (DENCM) will be delisted, and Sisecam will continue as a single company.

Foreign investors' shares in Sisecam, Soda and Trakya Cam from January 2019 to September 18 2020 (by Ak Invest).

From September 18 to September 25, the foreigners continued to sell Koc Holding. Koc Holding is thought to have been impacted by its oil refining giant Tupras (TUPRS), which is in trouble due to the COVID-19 crisis (chart below).

Foreign investors' share in Koc Holding and its subsidiaries from January 2019 to September 18 2020 (by Ak Invest). Foreign market players have shown some interest in Ford Otosan and Arcelik recently.

In the same week, Sisecam group companies remained popular among foreigners (chart below).

When it comes to the price board, since the end-2019, aviation stocks (catering services provider DOCO, low-cost airline PGSUS, airport operator TAVHL) remain among the top sold stocks along with Tupras and banks (VAKBN, HALKB, GARAN).

Hospital chain Medical Park (MPARK) replaced Turkcell in the list of the top sold stocks after having its place taken by Turkcell for a week. Some pundits should explain what is going on in Turkcell.

Foreign investors' share in Sabanci Holding (SAHOL) and its subsidiaries Akbank and electricity grids operator Enerjisa. Enerjisa seems an outlier when it comes to foreigners' interest.

Foreign investors have shown some interest in brewer Anadolu Efes (AEFES). Retailer Migros (MGROS) seems to have reached its limits. Despite interest in retailers during the height of the COVID-19 period, Yunus Kaya of Alnus Invest thinks that foreign investors sold hard discount chain BIM (BIMAS) since BIM launched a share buyback programme and provided a sale opportunity. Emlak Real Estate Investment Trust (EKGYO) was popular recently due to a home sales boom while petrochemicals company Petkim lost its foreign investors a long time ago.

The net asset value of the most popular Turkey exchange-traded fund (ETF), the Nasdaq-listed and USD-denominated iShares MSCI Turkey ETF (TUR), remained unchanged at $195mn between September 16 and September 25.

Despite the always-present danger of Russian aggression, and the subsequent military occupation of one-fifth of its territory, Georgia managed to survive as democratic state and now it is to going to vote again for the tenth time on Oct 31

Despite short-term volatility caused by the pandemic in 1H 2020, the Balkan region could be one of the relative winners globally in the post-COVID era.

The global economic recovery continued throughout the quarter, and the OECD now expects world GDP for 2020 to contract by only 4.5%, compared with 6% in their previous forecast from June. Equity markets have done better than expected.

As the death toll mounts among both Armenians and Azeris in the disputed region of Nagorno-Karabakh, the situation in nearby Georgia feels a million miles away. In the throes of both a parliamentary election and a growing Covid-19 epidemic, the fact

From October 8–15, the Kyiv International Institute of Sociology (KIIS) conducted a nationwide poll asking Ukrainians about the state of the country and their perceptions of its parties and politicians.

COLCHIS: A thirty-year journey of Georgian democracy
1 day ago
COMMENT: Why the Balkan region should be on investors’ radar screens
8 days ago
COMMENT: Improving sentiment in global markets amidst uncertainty
8 days ago
COLCHIS: Georgia’s Karabakh conundrum
9 days ago
FPRI BMB Ukraine: KIIS’ survey of Ukraine’s perceptions of parties and politicians
9 days ago