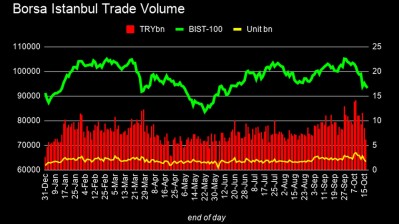 Officials in Turkey have shoved foreign investors to the sidelines as they battle to keep the country’s financial markets stable in the face of the turbulence caused by the international outcry over the Turkish invasion of northeastern Syria.

The transaction volume on the Borsa Istanbul, particularly in terms of banking stocks, has nosedived while liquidity has also dried up in the London offshore Turkish lira (TRY) swap market. The lack of trading follows the October 16 introduction by officials of ‘advice’ and bans designed to prevent the shorting of shares and the lira. The Erdogan administration has not yet been hit by anything like heavy sanctions over Syria, but given the fragility of Turkey’s economy following last year’s balance of payments crisis it isn’t taking any chances.

“TRY/local [bonds, equities, derivatives and other local markets] not really markets anymore—so heavily manipulated now by the Turkish authorities/state owned banks. Foreigners have long just been on the sidelines. Sure, they are not willing to short the currency, but at the same time now very reluctant to participate in government debt auctions given problems hedging,” Timothy Ash, a sovereign strategist at BlueBay Asset Management, said on October 17 in a note to investors.

Julian Rimmer of Investec responded to the measures put in place by officials on Turkey’s financial markets by on October 17 observing in a note to investors: “Yesterday's shenanigans on the Borsa Istanbul did not immediately spark a full-on currency crisis. Where are all of those 'economic hitmen and financial saboteurs' so unbeloved of the Turkish president? The lira is quoted higher than lunchtime Weds [October 16] and the stock market barely budged.”

‘What do portfolio managers do if they get a redemption?’

Rimmer added: “Regarding this Turkish predicament... Active [portfolio managers] may not be panicking yet at their inability to sell stocks in Turkey, or the 25% of the mkt which is represented by banks and which intls really care about, because most of them are under or zero-weighted in Turkey but what about passive funds? What do they do if they get a redemption? It seems implausible to me to imagine these latest developments in the mkt, in Syria, in Washington etc won't catalyse some redemptions.”

Rimmer observed that the “situation smacks of capital controls and has the potential to disintegrate very rapidly into an espactaculo de mierda. As a consequence of this clusterfcuk, unless, as a long-only, you can send your shs free of payment to your broker in preparation to sell—probably with 48hrs notice, it's impossible to sell”.

The Istanbul BIST-100 benchmark index’s volume on October 16 “was $907mill (my mkt share holding steady at 0.00%), down by a third from 3mth avge and is set to slump again today,” said Rimmer, adding: “I'm not sure I see how another FX crisis in Turkey is avoided. Selling in other names to raise cash would seem inevitable. MSCI will surely be obliged to take some steps to recognise this issue? It doesn't take a genius to realize that Russia will attract most of the fund reallocations.”

The lira was indeed flat on October 17 as Turkey’s state banks continued to squeeze the offshore swap markets to support the currency, ahead of the talks in Ankara between Turkish President Recep Tayyip Erdogan and US Vice President Mike Pence and US Secretary of State Mike Pompeo over the incursion into northeastern Syria, according to Reuters.

One-year dollar-lira swaps were down by 1bp to 16.69% as of the early trading hours of October 17 after jumping more than 60bps on October 16, Bloomberg reported.

The transaction volume on the Borsa Istanbul’s banking index (XBANK) fell to $179mn on October 16 from $522mn the previous day.

It was the lowest figure seen in the past four months, coming in at 66% below the 20-day average, according to Bloomberg.

As of 16:30 local time on October 17, only $76mn worth of transactions was recorded in the banking stocks.

Turkey’s benchmark 2-year and 10-year domestic government bond yields were above 15% while the country’s 5-year credit default swaps (CDS) remained below 400 and Turkey’s eurobonds showed a mixed picture across the curve.

The domestic government borrowing market has essentially been suspended since November 2018, but the reactions seen in the CDS indicators and eurobond markets to recent Turkey developments have been telling.

Foot traffic at Russia’s leading malls jumps as rebound gets underway
7 hours ago
Armenia’s coronavirus plight worsens with more than 1,000 more infections in two days
17 hours ago
Authorities “may be sowing seeds of Turkish economy’s downfall” by pumping money at fastest rate for more than decade
19 hours ago
Turkey’s electricity consumption collapses 17% in May
1 day ago
Russian government presents National Recovery Plan to President Putin
2 days ago