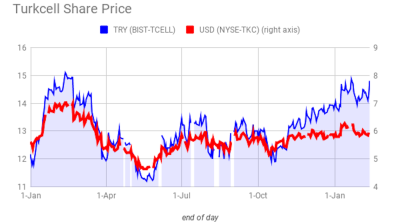 *This article was amended on February 21, 2019. The previous version said that the prepayment would be on a Chinese Development Bank loan. Our apologies for the erroneous information.

Turkey's leading mobile phone operator Turkcell has announced that it will on March 23 prepay $329mn covering two final principal payments on a club loan from BNP Paribas, Citibank , HSBC, ING and Intesa Sanpaolo that will mature on September 16. The telco provided the details on February 11 in a stock exchange filing.

The prepayment will increase the average borrowing maturity of Turkcell to five years from four years, the company said in the filing, adding that Turkcell differentiates positively from its peers with its 1.0x net debt/Ebitda ratio as per the latest financial statements disclosed publicly.

“The loan was utilized under the credit agreement disclosed on September 17, 2015,” according to the filing.

Agreement with Huawei on app ecosystem

On February 12, Seth Wang, a Huawei Turkey official, said that Turkcell has signed an agreement with Chinese telecoms giant Huawei to use the Huawei Mobile Services (HMS) app ecosystem.

Turkcell will be the first non-Chinese operator to use HMS. It will be the third software for mobiles, following Apple and Google software, used by Turkcell.

Turkcell said last year that Huawei has been a reliable business partner and its partnership with the Chinese company was set to continue, Reuters noted.

Turkcell is targeting sales of more than one million Huawei phones in a period running from April to the end of 2021, Turkcell CEO Murat Erkan said at a ceremony held in Istanbul to sign the HMS agreement.

In Turkey, there are a total of 4.6mn mobile phone subscribers with an Huawei identity and 2.3mn of them are active.

Turkey is also one of the largest markets for Chinese social media app TikTok.

In October 2018, Turkcell and Chinese technology giant Huawei signed an agreement to collaborate on “smart cities equipped with 5G technologies”.

In March 2019, Turkcell utilised loans of $225mn and €35mn with a maturity of October 2026 as part of a credit agreement with China Development Bank.

In December 2019, Turkcell signed a memorandum of understanding (MoU) on a €500mn loan from the China Development Bank.

In a December presentation for investors, Turkcell said it was targeting revenue growth between 13% and 16% over 2020-2022. It forecast that the company’s capital spending would be around 16-18% of sales revenues during the next three years.

As of end-September, the carrier had a total of 34.4mn mobile customers.

Turkcell will release its Q4 financials on February 20. The telco will attend on February 24-26 the J.P. Morgan Global Emerging Markets Conference in Miami.

The consensus estimate for Turkcell’s Q4 profit stands at TRY737mn.

Sweeden’s Telia Sonera is the largest shareholder in Turkcell with a 24% indirect stake while Cukurova Holding, owned by Turkish mogul Mehmet Emin Karamehmet, has a 13.8% stake and Russia's Alfa Group, owned by Russian tycoon Mikhail Fridman, has 13.2%.

Turkish President Recep Tayyip Erdogan is also present on the board of Turkcell, along with two independent members appointed to solve a deadlock among shareholders.

In February 2019, Turkcell signed a loan agreement worth $150mn with JP Morgan Chase Bank’s London branch and AB Svensk Exportkredit under a guarantee provided by the Swedish Export Credit Agency (EKN) in order to fund purchases from Ericsson AB and Ericsson Telekomunikasyon.

Turkish business presses Erdogan to beef up COVID-19 economic support and consider strict lockdown
Small countries in Balkans and South Caucasus most exposed to tourism industry collapse
IIF forecasts a contraction of -1.4% in CEE, -1.3% in Russia, but Turkish growth remains in the black in 2020