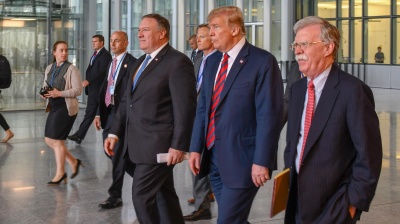 Trump flanked by US Secretary of State Mike Pompeo (left) and National Security Advisor John Bolton, two hawks that critics worry don’t exercise anything like enough caution when it comes to the question of war with Iran.
By bne IntelliNews May 16, 2019

US President Donald Trump has told his acting defence secretary Patrick Shanahan that he does not want to go to war with Iran, the New York Times and Wall Street Journal reported on May 16, citing unidentified administration officials.

He is said to have made the comment to Shanahan on May 15 during a White House briefing on rising tensions with Iran. Other administration officials have this week briefed US news outlets that Trump is concerned that hawkish aides who are intensifying Washington’s pressure campaign against Tehran should not escalate matters into open conflict. Trump himself has disputed reports that there are strong disagreements over the matter within his defence and national security teams that have led to infighting, saying that opinions are simply expressed and he decides.

On May 16, Trump was asked during a visit by the Swiss president, Ueli Maurer, whether the US was going to war with Iran. “I hope not,” he replied.

The president’s stated hopes that there will be a dialogue with Iran seem unlikely to produce a breakthrough any time soon. In Tokyo, Iranian Foreign Minister Mohammad Javad Zarif said there was “no possibility” of discussions with the administration to ease the tensions, Agence France-Presse reported. The Iranians have said they will consider talks if Trump takes the US back into the 2015 nuclear deal, a carefully constructed multilateral accord which in May last year Washington abandoned brusquely and unilaterally.

Private citizen Bolton
Trump’s national security advisor, John Bolton, as a private citizen long called for regime change in Tehran. He has coordinated the stepping up of the aggressive US sanctions campaign aimed at Iran—and most particularly its oil exports which Bolton wishes to drive to zero—and lately presented the routine, planned arrival of an aircraft carrier in the Gulf as a response to intelligence showing US forces are at increased risk of attack from Iran or its proxies in the region.

There are suggestions in the US media that the Pentagon is working on releasing photographs of the Iranians mounting missiles on small boats.

May 16, meanwhile, also brought a report from the Guardian stating that Iran’s most prominent military leader recently met Tehran-allied Iraqi militias in Baghdad and told them to “prepare for proxy war”.

Two senior intelligence sources reportedly said that Qassem Suleimani, leader of Iran’s powerful Quds force—the branch of the Islamic Revolutionary Guard Corps (IRGC) that handles Iranian military operations beyond Iran—summoned the militias three weeks ago, amid a heightened state of tension in the region. “The move to mobilise Iran’s regional allies is understood to have triggered fears in the US that Washington’s interests in the Middle East are facing a pressing threat. The UK raised its threat levels for British troops in Iraq on [May 16],” the UK daily wrote.

On May 12, four ships—two of them oil tankers of Iran’s regional arch-rival Saudi Arabia—were sabotaged off the UAE coast in the Sea of Oman. The following day, armed drones launched by Iranian-allied Houthi rebels in Yemen attacked Saudi oil pipeline infrastructre. US officials have said they believe Iran at least encouraged both operations, but no evidence has been presented to back that up or to indicate that Iran organised the attacks itself.

Saudi Arabia’s deputy defence minister and son of the crown prince, Prince Khalid bin Salman, on May 16 directly accused Iran of ordering Houthi militants in Yemen to target the pipeline that transits crude oil for export from the Red Sea coast. He said on Twitter that the attack “proves that these militias are merely a tool that Iran’s regime uses to implement its expansionist agenda”.

“We are not agents for anyone,” a Houthi representative, Mohammed Ali al-Houthi, told Reuters. “We make decisions independently and do not take orders for drones or anything else.”

Tehran’s ambassador to the United Nations, Majid Takht-e Ravanchi, told US broadcaster NPR on May 16 that Iran was not interested in escalating regional tensions but had the “right to defend ourselves”.

French renewables company Voltalia has won a tender for the construction of the 140 MW Karavasta photovoltaic park in southern Albania worth €100mn, Albanian PM Edi Rama announced on May 27. The ... more

Poland’s state-controlled refiner PKN Orlen will get involved in the Ostroleka power plant project it acquired via the purchase of utility Energa “only if it switches to gas,” the company said ... more