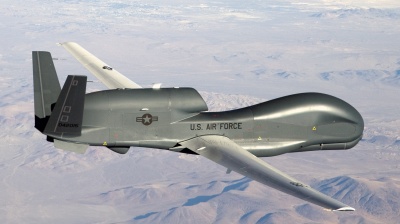 The Global Hawk spy drone is an expensive piece of equipment at $130mn a pop.
By bne IntelliNews June 20, 2019

Exactly how the US will respond to Iran shooting down an American Global Hawk spy drone with a surface to air missile in the early hours of June 20 was left deliberately unclear by President Donald Trump after he met with his national security advisers.

Trump suggested the action could have been carried out by a “loose and stupid” Iranian officer with no authorisation from Tehran. Iranian officials (who released unverified footage of the incident) said that the shooting down was a deliberate act that took place after the aircraft flew into Iranian airspace near the Strait of Hormuz. The US denied that it left international airspace, with Trump saying his officials had documentary evidence that that was the case. Iran claimed it would take the breaching of its airspace to the UN security council.

In further remarks to reporters outside the White House, Trump said: “I would imagine it was a general or somebody that made a mistake in shooting that drone down. I find it hard to believe it was intentional if you want to know the truth. I think it could have been somebody who was loose and stupid that did it. It was a very foolish move.”

Trump restated the administration’s red line that it would respond militarily if Iranian forces or proxies harmed Americans—but he seemed to emphasise that this was not the case on this occasion.

“We didn’t have a man or woman in the drone. It would have made a big, big difference,” Trump said. Asked how the US would respond, he said: “You’ll find out. Obviously we will not talk about this too much. They made a big mistake.”

Extracting US from wars
Trump added that he was staying with his promise to extract the US from wars in the Middle East, although he added: “But this is a new wrinkle, a new fly in the ointment what happened, shooting down a drone. And this country will not stand for it, that I can tell you.”

The number of major military incidents allegedly involving Iranian forces or the Iranian-backed Houthi militia that is fighting the Saudis in Yemen has grown markedly in recent weeks with analysts poring over any evidence that Tehran is responding to the painful “economic war” it says the US is waging on the Iranians by staging or sponsoring attacks designed to send a message to Washington that Iran can at the very least seriously disrupt world energy markets with actions in the Gulf if the Trump administration does not back off.

Last week saw two oil tankers damaged by limpet mines—Iran says as a result of a false flag operation, but the US has pointed the finger straight at Tehran—while, around the same time the drone was shot down, Houthi rebels in Yemen hit a Saudi desalination plant with an apparently sophisticated missile. There have also been a series of rocket and mortar attacks on or close to US facilities in Iraq, where there are several Iran-backed militias.

Oil prices jumped by about 5% following the shooting down of the drone.

Different playbook
Analysts are also assessing whether hardline clerical establishment elements in Iran might be working to a different playbook in responding to the increasingly painful sanctions imposed by the US, and the American military build-up in the Middle East, than the pragmatic, centrist government run by President Hassan Rouhani.

The news website of Iran’s elite Islamic Revolutionary Guard Corps (IRGC) said the drone was shot out of the sky when it entered Iranian airspace near the Kouhmobarak district, which takes in an area of Iranian coast facing the Strait of Hormuz.

“The downing of the American drone was a clear message to America … our borders are Iran’s red line and we will react strongly against any aggression … Iran is not seeking war with any country, but we are fully prepared to defend Iran,” IRGC commander Hossein Salami, said, to Iranian news agencies reported.

The $130m RQ-4A Global Hawk High-Altitude, Long, Endurance (HALE) aircraft is billed as the world’s largest surveillance drone. It is said to be packed with sophisticated electronics and it is the size of a small commercial airliner. It can carry out surveillance and reconnaissance missions over vast ocean and coastal regions, according to the US military.

Iranian Foreign Minister Mohammad Javad Zarif called the US description of events a lie and said that Tehran would prove its case. “The US wages #EconomicTerrorism on Iran has conducted covert action against us & now encroaches on our territory. We don't seek war, but will zealously defend our skies, land & waters. We'll take this new aggression to #UN & show that the US is lying about international waters,” he tweeted.

"We don't seek war but will zealously defend our skies, land and waters," Zarif added.

No appetite
Democratic US House of Representatives Speaker Nancy Pelosi said the US had no appetite for war with Iran. Leading candidate for the Democratic presidential nomination, Joe Biden, called Trump's Iran strategy a "self-inflicted disaster".

Russian President Vladimir Putin said a conflict between the US and Iran in the Middle East would be “a catastrophe”.

“If the United States do not exclude the use of armed forces. I want to say this; it would be a disaster. For the region at the very least,” the president stressed. “I very much hope that events do not follow such a scenario.”

“Iran is a Shiite country. In the Islamic world, they believe that they are people who are capable of extreme measures in defending their country. No one knows what these extremes will result in and whom they will affect,” Putin added, according to Rus Economica.

Saudi Foreign Minister Adel al-Jubeir told the BBC his country was trying to send a message to Iran that its behaviour was "not acceptable".

"Nobody wants to start a war. But we can't let Iran go on a rampage like this. The evidence of Iranian involvement is very compelling. They said they would do it, and now they are doing it," he said.