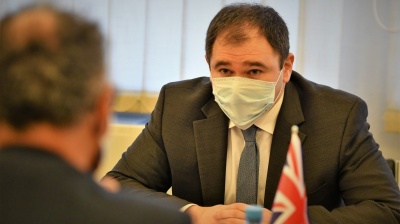 “Quite measured and soft”. That was the description given by Nikoloz Samkharadze, chairman of Georgia’s parliamentary committee on foreign relations, as he assessed the response of the country’s foreign development partners to the February 23 arrest of opposition head Nika Melia, who was grabbed by police who raided the barricaded HQ of the United National Movement (UNM) in Tbilisi.

The stark development has raised fears that Georgia’s ruling Georgian Dream party is moving towards authoritarian rule, but Samkharadze was having none of that, stating: "We must emphasise that the leaders of opposition parties in other developed countries do not behave like they do in Georgia. Therefore, the criticism was expected and may even be partially acceptable to us. In order for the leaders of the opposition parties to not act so rudely and arrogantly, to not challenge the law, society and the state, dialogue and constructiveness, and in compliance with the will of the electorate, is needed."

Melia was detained amid a situation in which the opposition parties have been boycotting the parliament, claiming last autumn’s general election was fixed in Georgian Dream’s favour. He was taken into custody after allegedly refusing to post bail on charges of organising and using group violence during June 2019 protests in Tbilisi, charges he claims are politically motivated. On February 18, Giorgi Gakharia, resigned from the post of prime minister after saying that subjecting Melia to a pre-trial detention order would exacerbate divisions in the country.

‘Out of the question’

Georgia’s new PM, Irakli Garibashvili, said in one of his first statements as head of the Georgian Dream government that snap elections—the main demand from the opposition parties—were out of the question and that “ordinary criminal” Melia belonged in jail—he made that comment despite the fact Melia has not yet stood trial.

The main topic of talks between the opposition parties’ leaders and foreign ambassadors in Tbilisi following the Melia arrest has been whether there is still room for negotiations with Georgian Dream and the government and de-escalation of the political crisis. Given the radicalisation of the ruling party evidenced by events, it is not clear that much time still exists to arrange such talks.

Observers remain uncertain as to how the tensions can be dissipated (the opposition parties appeared to be planning big street protests for February 26). Snap elections might not be a panacea, some argue.

"The Georgian public is tired and apathetic. A public opinion poll published in December 2020 showed that 54% of voters believe no party represents their views. In a situation like this, even the proposed snap elections are not a panacea. Georgia needs compromise and a power-sharing agreement between both sides, and that is what international partners should urge all sides to do," argued Nino Ghvinadze, a nonresident senior fellow at the Atlantic Council’s Eurasia Center.

Samkharadze’s words indicate Georgian Dream is not going to take a step back from the tough position it has taken. They pour cold water on hopes for a sudden improvement in the environment for negotiations. Talks indeed have gone from bad to worse in the three months since the general election. Radical decisions that could not be walked back might have been taken by the powers that rule over Georgian Dream even before Gakharia resigned.

The relaxed attitude about the state of affairs as expressed by Georgian Dream’s main players highlights concerns not openly voiced so far: that the party may plan to upgrade ties with Moscow, in theory in the best interest of the country, but also, in reality, against the will of a significant part of the electorate, particularly given the unknown price the Kremlin would demand for such an open change in relations.

“The acknowledgement by former Prime Minister Gakharia of the politicisation of law enforcement, and his resignation over it, should clarify that the governing decision-maker is [Bidzina] Ivanishvili,” said Luis Navarro, a Eurasia Program fellow at the Foreign Policy Research Institute, referring to the billionaire oligarch and Georgian Dream founder who lately claimed to have resigned from politics, to much scepticism—there are plenty of Georgia watchers who remain convinced he is still pulling the strings.

Navarro went as far as suggesting that tougher measures, such as sanctions that have been put into play against Russian oligarchs, might be needed in the case of top Georgian oligarch Ivanishvili as well.

“If the Western aspirations of the Georgian people are to be realised and the will to defend democracy within Russia’s neighbours still exists, then intervention cannot be limited to the government and opposition, or supporting the media and NGOs, it must be directed at Ivanishvili specifically,” said Navarro.

“Georgian Dream has long wished for closer relations between Georgia and Russia, feeling that they are in the best interests of the country. Bidzina Ivanishvili also made his fortune in Russia,” said Mitchell Orenstein, professor of Russian and East European Studies at the University of Pennsylvania and senior fellow at the Foreign Policy Research Institute.