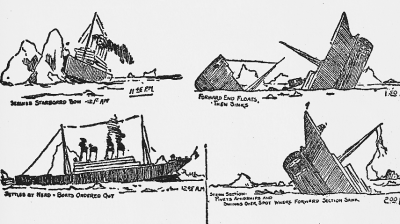 The sinking of the Titanic, based on survivor Jack Thayer's description. Sketched by L.P. Skidmore on board Carpathia.
By bne IntelIiNews November 23, 2021

The Turkish lira was in freefall during the morning of November 23, at one point shedding around 15% to reach a latest historic low of 13.465 versus the dollar—but, faced with a second currency crisis in a little over two years, President Recep Tayyip Erdogan was yet to show any sign of budging from his “economic war of independence”, declared in a tirade on November 22, and ‘Erdoganomics’ in which he unconventionally argues that tightening interest rates pushes up inflation. On the markets, mentions of “Turkey” and “Titanic” in the same sentence were not out of place.

“Insane where the lira is, but it’s a reflection of the insane monetary policy settings Turkey is currently operating under,” Timothy Ash, senior emerging markets strategist at Bluebay Asset Management, said in a note in response to the Turkish lira (TRY) meltdown.

“It used to take a year for the lira to go thru a figure, then a month, a week, a day. Now it goes thru a figure in the time it takes me to get to work on my bike,” he added, in a tweet. “We are seeing a perverse economic experiment of what happens when a central bank has effectively no monetary policy.”

Semih Tumen, a former Turkish central bank deputy governor who Erdogan dismissed in October, sharply criticised the president’s stance. “We need to abandon this irrational experiment, which has no chance of success, and return to quality policies that will protect the value of the Turkish lira and protect the welfare of the Turkish people,” Tumen wrote on Twitter.

Turkey’s last currency crisis was in August 2018. As the lira on November 23 threatened to collapse even further, the debate was at what point you could describe the country as having entered into another currency crisis. This publication has argued that Turkey has remained in a financial and economic crisis since August 2018 and, further, that Turkey entered a full-blown process of collapse, or financial and economic depression, with the failed coup attempt of July 2016. The feasible limit for the USD/TRY pair is currently found somewhere up in the sky but get ready for something of a U-turn somewhere along the way, likely involving the firing of the latest central bank governor.

In a note sent out after this morning’s depreciation taking the lira’s losses versus the USD to around 40% in the year to date, Jason Tuvey at Capital Economics, said: “Further falls in the lira are likely to lie in store and we think that it will probably take the emergence of severe strains in the banking sector before policymakers respond with aggressive policy tightening. We aren’t there yet.”

He added: “Investors are clearly testing policymakers’ tolerance of a weaker lira and the experience from previous sudden stops in emerging markets suggests that the currency will suffer further falls over the coming days that take it beyond 13/$. Whether it then stabilises, will depend on the policy response.

“The traditional way out of a currency crisis is to push through aggressive monetary and fiscal tightening to try to improve policy credibility and regain investors’ trust. During Turkey’s crisis in 2018, officials eventually responded once severe strains in the financial system started to materialise. They initially tightened monetary conditions through the interest rate ‘corridor’ before raising policy rates sharply.

“For now, at least, there are few signs that things are about to change. The banking sector doesn’t appear to be under severe strain – banks’ bond yields have risen but remain low (unlike in 2018, when they spiked dramatically). As we highlighted in a note yesterday, this reflects the fact that banks are better placed to cope with the spillovers from a weaker lira than they were a few years ago.

“As long as that remains the case, and President Erdogan is dictating policy, we suspect that the central bank is more likely to opt for minor tweaks (e.g. a modest tightening of monetary conditions via the corridor and, possibly, soft forms of capital controls as they’ve used before) rather than aggressive action.

“But the risk is that the lira suffers further sharp and disorderly falls that do trigger problems in the banking sector. A credit crunch could ensue that weighs heavily on economic activity. A key threat also lies with banks’ FX deposits – any signs of a flood of withdrawal requests would probably prompt a lurch towards more aggressive forms of capital controls.”

RIMMER: Turkey - Let nothing astonish you

Across three decades fabulous riches were secured at home and offshore in oil, gas, metals, banking and luxury property.

UniCredit is considering a takeover of Russia's Otkritie Bank, but rising geopolitical tensions coupled with an increasingly competitive financial environment could jeopardise the plan.

Who needs a war?
8 hours ago
Outbreak of calm grips Ukraine
9 hours ago
Primark to launch in Romania as it pursues CEE expansion
16 hours ago
All eyes fall on Nazarbayev clan’s extraordinary wealth as Kazakhstan’s Tokayev asserts authority by targeting super rich
1 day ago
UniCredit's hopes of acquiring Russia's Otkritie Bank marred by geopolitical tensions
4 days ago