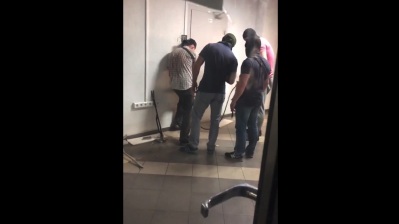 Belarusian security officers break into the Minsk offices of the US government-funded RFE/RL.
By Ben Aris in Berllin July 19, 2021

Belarusian opposition leader Svetlana Tikhanovskaya arrived in Washington on July 17 to lobby the US government for support in the struggle to oust Belarusian President Alexander Lukashenko. Her visit comes as Lukashenko renews a crackdown on the media, harassing and jailing dozens more journalists.

“It is such an honour to have been greeted by @USAmbBelarus upon my arrival in Washington D.C. Ambassador Fisher has been working tirelessly to support Belarus. I am very excited to start my visit to the United States and I hope it will help Belarus on its way to democracy!” Tikhanovskaya tweeted on her arrival in the US.

Before the political crisis began relations between the US and Belarus had been improving. Washington had just appointed an ambassador, Julie Fischer, so re-establishing diplomatic ties which were broken off in 2008.

After the mass protests broke out in the wake of the disputed August 9 presidential elections the US joined Europe in imposing sanctions on Belarus. In protest Belarus has refused to issue Fischer with a visa and she has been working from neighbouring countries and travelling round Europe to co-ordinate US policy on Belarus with European allies.

Her visit comes as Lukashenko turns the screws on the press and police raided the US Congress-funded Radio Free Liberty/Radio Europe (RFE/RE) offices in Minsk. The international press had their accreditations withdrawn last year but RFE/RL employs local journalists, who run a Belarusian language service, Radio Svaboda (English: Radio Freedom).

Among those targeted on Friday were 22 journalists who worked for the Belsat TV channel, which is funded by Poland. Several of the senior RFE/RL local journalists also had their accreditations cancelled last year, but their homes were also searched over the weekend and some were detained.

Police arrived and broke the door down before searching the premises, questioning the staff and confiscating technical equipment. The homes of staff were also searched, and several staff members were detained.

The raid on the RFE/RL office was part of a much wider crackdown on the remaining press outlets as Lukashenko attempts to crush all media channels that are not controlled by the state, leading Fischer  to describe Belarus’ as Europe’s North Korea during testimony to the US Senate Foreign Relations Committee in June.

Most of Belarus’ leading independent media have already been shut down, including the highly influential TUT.by which was closed down in May. In the last week more raids and arrests were carried out around the country and former journalists working for various outlets, including RFE/RL, were caught up in the dragnet.

Overall, 32 Belarusian journalists are currently in custody, either serving their sentences or awaiting trial, according to the Belarusian Association of Journalists.

bneGREEN: CBAM to have less bite than bark

Belarusian opposition leaders Maria Kolesnikova and Maksim Znak were sentenced to over a decade in jail
Poland declares state of emergency along border with Belarus to stem migration
bneGREEN: CBAM to have less bite than bark