The number of people without access to electricity is rising for the first time in decades, mostly in Africa 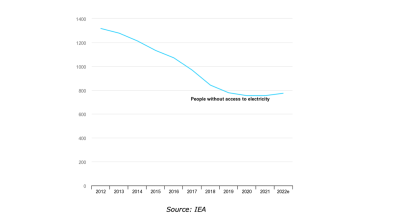 The number of people around the world who live without electricity is set to rise in 2022 by about 20mn to nearly 775mn, the first global increase since the IEA began tracking the numbers 20 years ago. / bne IntelliNews
By bne IntelliNews November 15, 2022

The number of people that don’t have access to electricity has started to rise for the first time in decades thanks to the energy crisis, the International Energy Agency (IEA) said in a report.

The global energy crisis is undermining efforts to ensure universal access to secure and affordable energy, especially in sub-Saharan Africa, reversing years of progress. According to the latest IEA data, the number of people around the world who live without electricity is set to rise in 2022 by about 20mn to nearly 775mn, the first global increase since the IEA began tracking the numbers 20 years ago.

The largest increases in the number of people without access will come in the Democratic Republic of the Congo, Madagascar and Ethiopia, the IEA reports. Progress will slow but not halt in Mozambique, Senegal, Kenya and Bangladesh.

“Ensuring people have access to reliable, affordable and modern energy services is critical for sustainable economic development – and needs to be a key part of the discussions at COP27. But as we point out in this new commentary, the world is going backwards on this front,” the IEA said.

“Rising prices for fuel and food are disproportionately hurting those in the developing world, where they are least equipped to cope. In addition to the increasing number of people without reliable and affordable energy, [the count of] those facing chronic hunger is also sadly on the rise again, reversing progress on several of the United Nations’ Sustainable Development Goals (SDG),” the IEA said.

Some countries already witnessing rising populations without access will see this trend accelerate, with the largest increases set to occur in the Democratic Republic of the Congo and Madagascar, the IEA reports.

While modest progress may continue in some countries, it will be at a much lower pace. Bangladesh – home to almost 10% of those without access in developing Asia – is set to see a slowdown in 2022, especially for new grid connections.

In sub-Saharan Africa, progress in Mozambique, Senegal and Kenya is set to slow, but not halt while in Ethiopia, population growth is once again outpacing new connections, a sharp reversal from the rapid progress prior to the pandemic.

Grid connections proved resilient in 2020 and 2021 with projects in the pipeline from before the pandemic mostly being completed. However, new procurement has slowed down since then, with many utilities lacking funds for energy access projects after they prioritised cushioning their consumers from rising prices. Many Africa utilities were already in a perilous financial situation heading into the pandemic, and operational losses have been climbing substantially since then.

Off-grid access solutions are facing even stronger headwinds, with inflation hitting consumer demand. Prices of key components used to manufacture solar PV modules, batteries and inverters are sharply rising, which has been further exacerbated by local currencies depreciating against the dollar.

The cost of solar and hybrid mini-grids has increased by at least 20% in 2022 from pre-pandemic levels. The average market price for a new solar home system (SHS) is up by around 30% since 2020, causing households to opt for smaller or lower quality systems. Sales of large SHS in 2021 were nearly a third lower than their 2019 peak with the largest declines happening in East Africa. These effects are putting firms in the off-grid industry under financial duress, with a majority of firms indicating they risk bankruptcy in the next three years under the current financial circumstances, the IEA reports.

“Together, these setbacks put the world further behind on meeting targets for universal access by 2030, canonised in the United Nation’s Sustainable Development Goal 7. Under today’s policies, our World Energy Outlook 2022 projects 660mn people still without access to electricity in 2030, 85% of those living in sub-Saharan Africa,” the IEA said.

The agency estimates achieving universal global access to electricity by 2030 would require annual investments of $30bn from now to 2030, of which around two-thirds are needed in sub-Saharan Africa. As highlighted in the Africa Energy Outlook 2022, international support is essential to catalyse investment, especially in today’s difficult financial conditions, the IEA said. “Reaching this level is well within the means of the international community, and must be an unerring focus for development banks,” the IEA commented.

In order to meet the challenge Egypt is in the vanguard of turning to nuclear power to meet demand.

At COP27 the Egyptian Presidency made it clear that accelerating efforts to reach universal access will be a key part of its agenda, and the IEA is supporting the Presidency as they launch the Africa Just and Affordable Energy Transition Initiative (AJAETI). “This timely initiative aims to facilitate technical exchanges and help improve the investment environment for access solutions in Africa. The international community can play a decisive role by mobilising more financial support toward access solutions and the clean energy transition in Africa, which can reduce import dependence while helping countries meet their growing energy needs,” the IEA said.

Poland basks in the glory of being Europe’s chief ally of Kyiv
8 hours ago
Russia forges ahead with gas ambitions in Uzbekistan, Kazakhstan
1 day ago
Mongolian government accused of rushing through veiled law that dismantles freedom of speech
2 days ago
Russia is preparing for spring mass mobilisation
2 days ago
Davos climate change debates hindered by lack of Russian, Chinese delegates
3 days ago